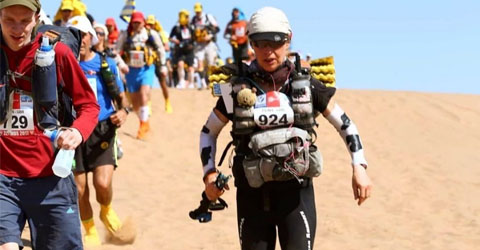 Fiona Oakes is the greatest runner you’ve never heard of. She’s a 4X world record holder in distance running, and she has completed some of the toughest endurance running challenges on Earth including the formidable Marathon des Sables, the Antarctic Ice Marathon, and the North Pole Marathon. She’s also a volunteer firefighter, operates Tower Hill Animal Sanctuary with 450+ animals, and does all of this without a kneecap (she lost it to disease at the age of 17). You’d be hard-pressed to find another individual with as much grit as Fiona with an equal amount of humility to match. We are honored to have Fiona as part of our dairy-free team and humbled by the fact that she took time out of her intense work and training schedule to answer our questions. How does she do it all? We had to find out.

Fiona adopted a dairy-free and plant-based diet at an early age, well before many of us had even heard of the notion. At three years old, she declared that she was a vegetarian, and at six, she removed all animal products from her diet. This was not due to parental influence; she grew up in a blue-collar family in the UK where money was tight and one was taught to be grateful for what you had. She admitted that it wasn’t a decision, as she was too young to fully comprehend the scope of her choice, but a reaction to the “injustices of those I loved and felt so connected to.” Fiona continued, ”I didn’t understand the intricacies and extent of the cruelty and exploitation the industry that is animal agriculture inflicts on other sentient beings. I didn’t realize the personal health benefits of being vegan, the positive impact on the planet, and the injustice of the unfair distribution of resources to other humans by feeding their grain to animals. I just didn’t want to be party to the harming of these beautiful creatures.”

She believed that if she did well in these races, she could lead by example and prove that a dairy-free, plant-based diet was not limiting, but empowering.

She grew up with grit, always involved in sport and hard work, but once she hit her teens, she developed a crippling disease that ultimately resulted in the loss of her kneecap. She was told she wouldn’t walk properly again. To say she proved the doctors wrong is a gross understatement, but that is Fiona’s way. She’s not one to brag.

Despite her almost daily 20-mile training runs and a steady schedule of international marathons, Fiona doesn’t love running. She’s not in it for the runner’s high or to test her limits or find transcendance—and she’s certainly not in it for the money. Fiona runs to raise awareness. She’s soft-spoken and polite—the antithesis of a rabble-rouser—but her actions and accomplishments speak louder than any raging activist with a megaphone. She knew she wanted to help animals, and when she realized that marathons were a popular sport, she put two and two together and laced up. She believed that if she did well in these races, she could lead by example and prove that a dairy-free, plant-based diet was not limiting, but empowering. “I have learned to let my actions articulate for me,” she remarked. Countless top finishes, four world records, and a feature-length documentary later, Fiona’s actions speak for themselves.

One Meal a Day

Athletes are conditioned to seek out fuel; some even bring gels on as little as a 45-minute run. To this constantly fueling majority thought, Fiona’s one meal a day is a complete anomaly. But it works for her. “I am not really a big ‘food’ person and see it only as a fuel, not a social event. For me, it seems to make sense to only eat when you are hungry, and I am only hungry at the end of a long day working at the sanctuary,” she explained. Even on long runs (we’re talking 4-plus hour runs) she typically does not carry fuel. This, of course, leads to a bit of a challenge when taking on multi-day endurance races such as the Marathon des Sables. She gets the fuel she needs but admitted that she prefers carbohydrate drinks during the actual race. And let’s be clear: Fiona has stuck to this regimen for most of her adult life, well before intermittent fasting was a thing. It’s all about efficiency. “I just know it really does suit my digestive system very well and means that I can work through the day— whether it be at the sanctuary, at the fire station, or training—without interruption. It’s actually how I manage to cram so much into my life—coupled with waking up at 3:30am every day!”

When the 500 mouths on the sanctuary are fed and her mileage is complete, Fiona finally sits down to her simple meal, much of it made from the produce grown on her property. She explained that her mother is “a genius with fresh vegetables,” and prepares the daily meal which includes everything from seasonal fruits and vegetables, whole grains, pulses, nuts, seeds, “and plenty of nutritional yeast.”

Fiona is a lone wolf runner, both by circumstance and by choice. When asked about what goes through her mind during those daily hours of pounding pavement, she responded, “Anything and everything. On my speed sessions I don’t really have time to think. On longer efforts, sometimes it’s just ‘Wow, this is tough,’ but other times my mind wanders all over the place. The day’s news events, my next training sessions, what needs doing when I get back to the sanctuary, something horrible I might have seen on social media, a question I have been asked or would like to ask. Basically, my running time is my thinking time and whatever I am thinking about I always come back more focused than when I set off.”

All of this training prepares her to compete in “Big City” road marathons to adventure races, and while the city events allow her to speak her message to the masses, the ultra endurance events push all her buttons. She described the first time she ran the Marathon des Sables as the most difficult race she’s endured, and it’s no wonder—it’s a self-sustained, six-day, 250 km race across the Sahara Desert—and she did it with two broken toes. The polar opposite of this race, Fiona said that she most enjoyed the Antarctic Marathon which she “won in record time and smashed 3 Guinness World Records. A very, very sweet victory,” she remarked.

I love these races because they are more than about running, they are about surviving and learning so much about yourself.

In 2019, Fiona will participate in the Gobi March and the Berlin Marathon. She described the Gobi March as, “another week long, self-sufficiency effort in the Gobi Desert.” She continued, ”I love these races because they are more than about running, they are about surviving and learning so much about yourself. You go to very dark places in these events but always come out a much stronger and better person.” For Berlin, she plans on donning her cow suit—the same one in which she broke the Guinness World Record for Fastest Woman Wearing an Animal Costume at the Tromso, Norway Half Marathon.

“Why do I run some races dressed as a cow?” Fiona asked. “A question very often asked and the answer is simple—[so that] people ask that question which allows me to introduce them to the horrors of the dairy industry, one which is very often overlooked and even endorsed, especially in the sporting environment. People often think dairy is healthy, and this is a myth perpetuated by suppliers, health professionals, educational and governmental bodies, and coaches and trainers alike. This idea is so deep rooted and ingrained it can be a hard one to break down, but it is one I have had great success in doing by wearing my cow costume and running well in it.”

Take Nothing for Granted

Fiona’s thoughts on running kept us riveted. Some may ask why she puts herself through all that pain (remember, the woman doesn’t have a kneecap) and all that stress of operating a 450+ animal sanctuary. Looking back on her childhood, the races, and all the opposition she has faced, she reflected, “[I’ve] learned to take nothing for granted, grab every opportunity and, for want of a better phrase, run with it. I think that to truly understand suffering, you have had to suffer yourself. Indeed, I do wonder if that is what drives me in the very extreme races I run, a need to remember and experience firsthand the feeling of pain, desperation, hardship, and depravity. For sure, I know it’s only a race, but as a high achiever who runs for the benefit of others and not myself, failure is not an option. To fail would be to let the animals down, to miss an opportunity to promote veganism in a positive way, and to show that anything and everything is possible to achieve without the harming of others.”

From 400 lbs & Disabled to Thriving Plant-Based...

This Plant-Based Ultra Race Runner is Striving For...