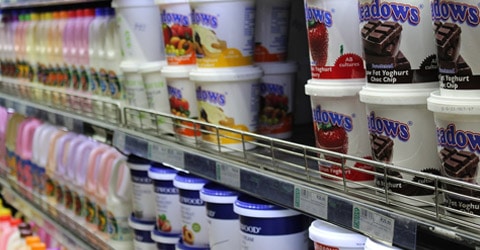 Dairy sales are in decline. In 2018 alone, the Dairy Farmers of America reported a $1.1 billion drop in total national milk sales. With the rise in popularity of plant-based milks—which saw a significant 9 percent rise in that same year—Big Dairy is scrambling to find an outlet for all this milk the American public has decided they no longer want or need. Relying on its impressive marketing arm and unbelievable ability to spin a story, dairy found this outlet in the probiotic/gut health trend. From the early adopters of Activia to millennials who are now literally buying into the cultured yogurt phenomenon, many are convinced these fermented dairy foods benefit their digestion. We sat down with Dr. Angie Sadeghi, Switch4Good’s resident gastroenterologist, to learn more about the true costs and benefits of probiotic dairy foods.

What Actually Goes On In the Gut

Dr. Sadeghi explained that the gut—which constitutes the entire digestive system from mouth to anus—holds 100 trillion organisms including bacteria, fungi, viruses, and archaea. When fed, these various organisms aid in producing necessary bioactive molecules such as hormones, neurotransmitters, enzymes, substrates, and amino acids. Dr. Sadeghi explained, “Every time you eat, the biome is the first to taste your food. They help digest and process food and are more active in the process of digestion than your own pancreatic enzymes.” She also noted, ”You’re not in control, [your biome] is.” Suffice it to say, these organisms shouldn’t be ignored.

The Difference Between “Good” & “Bad” Organisms

Many of us have absorbed the concept of “good” and “bad” gut bacteria thanks to the gut health craze sweeping social media and supermarket shelves. In reality, it comes down to the two types of organisms living in your gut: symbiotic and parasitic. The symbiotic variety are viewed as the “good” microbes; when fed, they help metabolize the food and in turn produce one or more of the bioactive molecules mentioned above. In contrast, the parasitic organisms take in certain foods and produce inflammatory molecules, which can disrupt gut health and result in symptoms such as gas, bloating, and stomach pain.

Gut health is determined by which of these two types of organisms is in control. The more symbiotic microbes, the healthier the gut. Inversely, if the parasitic microbes outnumber the symbiotic ones, this will result in an unhealthy (and uncomfortable) gut. Thankfully, this system is extremely receptive, and we have the power to change our gut microbiome simply by what we decide to put into our mouths.

How Food Affects the Biome

Both symbiotic and parasitic organisms react to the food we eat. Foods that support the symbiotic microbes are largely found in the plant kingdom and include fiber-rich fare such as fruits, vegetables, nuts, seeds, and legumes. According to Dr. Sadeghi, the more of these foods you eat, the more you will support a “friendly biome.” However, high-fat foods—particularly those high in saturated and trans fats—generally support the inflammatory/parasitic microbes. These foods include meat, eggs, sugar, and dairy. Dr. Sadeghi noted that eating the occasional parasitic-stimulating food—such as a piece of cake—may or may not override an otherwise healthy diet. She explained that if one has a healthy gut, eating some processed sugar or oil won’t have as much of an impact to overall gut health as opposed to one starting with a borderline or unhealthy gut. Essentially, a celebratory scoop of non-dairy ice cream won’t help your gut, but it won’t tip the bucket, either.

According to Dr. Sadeghi, fiber-rich foods are generally enough to boost and maintain a healthy gut biome. While companies claim to have packaged the secret to digestion via fermented foods—such as yogurt, sauerkraut, kombucha, wine, and cheese—the truth is there is no recognized scientific evidence to support these claims. Dr. Sadeghi stated, “There are no studies which have actually looked at whether these probiotics get incorporated into the gut mucosa or get discarded into the stool. In fact, we don’t even know for sure they aren’t harmful. In a recent study published in Cell, researchers looked at whether probiotics get incorporated into the mucosa post antibiotic therapy to restore gut health.[1] They did colonoscopies on two groups of individuals and samples their biome. Both groups received antibiotics. One group received probiotics and the other group did not receive probiotics. They wanted to know whether taking probiotics restored the health of the gut faster. To their surprise, the group that didn’t get probiotics recovered the biome faster!”

Dr. Sadeghi supported her statement by noting that she does not go out of her way to eat fermented foods. Until there are more studies to prove the benefits of ingested probiotics, you won’t find her popping any pills or spooning “gut-friendly” yogurt—nor will she recommend these to her patients.

We’ve determined that there is no suitable research that links any benefits to eating fermented foods, but for the sake of argument, let’s assume that a few solid studies are published in the near future and positively associate fermented foods with improved gut health. Let’s also assume that even though 65 percent of the global population is lactose intolerant, the questionable science claiming fermentation helps digest lactose turns out to be valid.[2] This still would not justify the consumption of dairy-based yogurt for the sake of the microbiome. Essentially, just because a food contains one benefit doesn’t mean it’s healthy. We have to weigh the pros and cons. Dr. Sadeghi likened this to the idea of the Coca Cola company promoting Coke as a health drink because they fortified it with potassium. Yes, our bodies need potassium, but the processed sugar and empty calories outweigh this one benefit. So, even if fermented foods were seen to restore gut health, the health risks associated with dairy—including eczema, acne, diarrhea, gas, bloating, abdominal pain, worsening of IBS, and more—far exceed any minor improvement these probiotics may provide.

If we can’t rely on our daily morning yogurt or an afternoon kombucha to restore our gut health, what will we do? It’s as simple as cutting back on dairy and high-fat foods and replacing them with fiber-rich foods. A dairy-free, plant-based diet will produce a plethora of those symbiotic organisms, and over time, these little guys will win the day.

Why Your Microbiome May Be to Blame for Your Bloating...