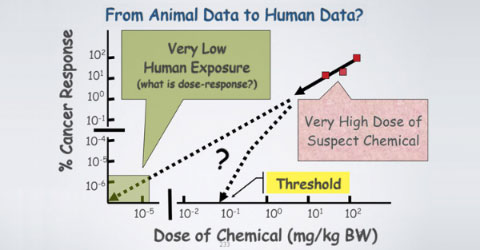 Casein is a chemical carcinogen.
Some chemicals in our environment qualify as carcinogens. That is, they cause cancer, based on testing them in experimental animal studies according to criteria set forth by our government.[1]

Such a study has one control group (that’s no chemical), then 2-3 treatment groups, each with increasing amounts of chemical, usually far and above the amount we might experience in order to be sure that it does not cause cancer (take a look at the graph below). 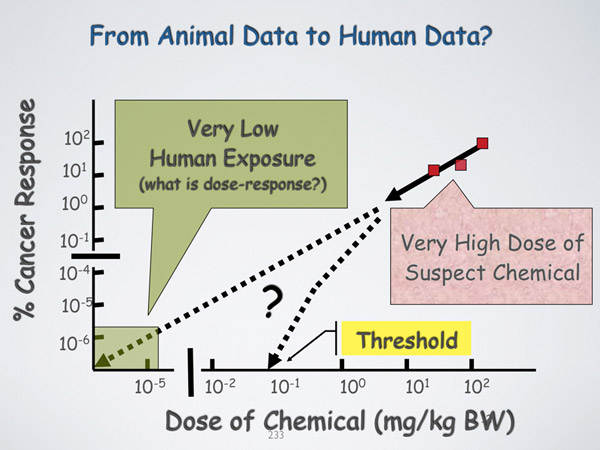 A cancer causing response (shown here as dependent on level of chemical consumed) is then used to estimate which levels of carcinogen exposure might be of concern for humans (small green box). But estimating likely human response is virtually impossible because the rat carcinogen levels are usually orders of magnitude higher than typical human experience.

In our experiments over 25+ years, and published extensively, we showed that casein increased experimental cancer at levels within the range of human experience (that is the green box) — with no need to estimate low level response in humans, from high level response in rats — and we know also know how it works! This suggested casein (and likely most other animal proteins) is a far more relevant carcinogen than any pesticide, herbicide, food additive or other noxious chemical ever tested. What would you conclude?