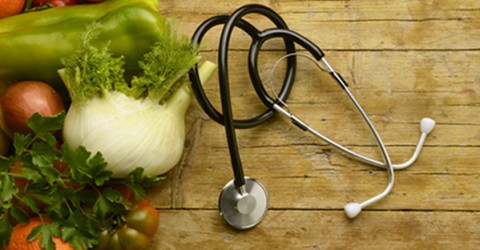 2015 was a big news year for healthier eating. At the T. Colin Campbell Center for Nutrition Studies we reached millions of people through our website, Facebook and newsletter. We added hundreds of new articles and recipes to the site and increased enrollment in our Certificate Program in Plant Based Nutrition.

I believe there is a widespread, growing trend toward understanding the health benefits of eating whole plants instead of animal and processed foods. Here are my top 10 research and news stories of 2015 (originally presented at the Lunch With Docs, UR Program for Nutrition in Medicine).

We now have several examples that early man was eating starchy plants far earlier than popular perception would allow. For example, researchers have discovered evidence of plant food consumption in the human dental remains found in a cave dating from 200,000-400,000 years ago[1]. In addition to meat, humans were consuming starch and polyunsaturated fats, suggesting they were eating seeds or possibly starchy root vegetables (also known as underground storage organs, if you want to think about these in sexier terms).

Researchers put forward a comprehensive argument[2] that the evolution of man to a bigger-brained animal was supported not by meat alone, but also required starch. The brain uses relatively massive amounts of glucose, supplied most efficiently by starches, and the following related changes may have occurred about the same time, geologically speaking: the advent of fire and cooking, which allow starches to be more easily digestible, the growth of our glucose-hungry brain, and the emergence of our amylase genes, which allows us to break down starches for digestion.

Recently published research shows that those with at least ‘moderate’ chronic kidney disease have a lower mortality rate the more of their protein comes from plants. For every 33% increase in the ratio of plant to total protein consumption, researchers found a 23% decreased risk of mortality[3].

8 – Filling Up With Beans

Beans are excellent foods in many ways. This research[4], funded by the Minnesota Beef Council, showed that a meal with beans, containing moderate amounts of protein and plenty of fiber, was just as filling and satiating as a meal with beef, even though the beef had more protein than beans (and less fiber). Calories and fat content were the same in each meal. In fact, early after the meal, some of the ratings for hunger, satisfaction, fullness, and the subsequent food consumption were better for the bean meal. It was a simple study that won’t change medicine, but addresses the pervasive opinion in popular dieting and health that meat, with lots of protein and no ‘carbs’, will keep you fuller longer. Instead, eat some beans.

There are lots of famous people praising the benefits of eating plant-based diets. This year it seemed there were more than ever. From Beyonce and Jay Z to James Cameron, who has given away thousands of copies of The China Study, it seems that many famous personalities are getting health benefits or protecting the environment by encouraging eating plants. Even the Terminator suggests that you to terminate your meat consumption habits, at least part-time. Other influential people, like the president of the American College of Cardiology in 2015, have praised plant-based diets.

A well-done trial[6] with obese kids with metabolic syndrome, all consuming diets engorged with sugar, showed that swapping out their sugar, particularly fructose, for refined starchy foods like bagels, bread, cereal and pasta resulted in lower cholesterol levels and better insulin levels in just 10 days.

A healthy diet is not just about plant vs. animal foods. It also is about avoiding processed foods, including added sweeteners.

4 – Obese Kids (and their parents) Should Go Plant-based

A Cleveland Clinic study[7] showed that obese kids with high cholesterol and their parents did better on a no-added-fat, plant-based program than they did on the American Heart Association Diet. They lost weight and reduced cholesterol and inflammation in just 4 weeks.

2015 showed many interesting results related to diet and cancer. For example eating purple potatoes fights colon cancer in an experimental model[8]. In another intriguing study[9], the diets of rural Africans, and African Americans in Pittsburgh were swapped in a controlled environment. Research demonstrated that several important changes occur when switching between a low-fiber western diet and a high-fiber, plant-based diet. There was more inflammation, more cell proliferation, and less butyrate and more bile acid (all bad things) after just 2 weeks (just two weeks!) on a western diet.

Despite many years of the Dietary Guidelines Committee putting forth industry friendly recommendations, this year they caused an uproar. They wrote, “The major findings regarding sustainable diets were that a diet higher in plant-based foods, such as vegetables, fruits, whole grains, legumes, nuts, and seeds, and lower in calories and animal-based foods is more health promoting and is associated with less environmental impact than is the current U.S. diet.”[12]

While the report was short of the whole-food, plant-based diet I recommend, it was a big step in the right direction. Simply having a different language supportive of plant-based diets is a big deal. Unfortunately, congress has already acted to strip away any commentary about environmental sustainability, and I’m guessing that industry is now taking steps, via congress, to make sure this never happens again. Scientific policy statements, after all, are only valid if they sell more product, right?

These recommendations from the advisory committee signal an institutional shift in acceptability of plant-based diets, which is immensely important.

1 – Processed Meats Cause Cancer, and Red Meat Probably Does As Well

The recent WHO report told the world that processed meats cause cancer (colorectal) and red meats probably do too (colorectal, possibly others). It was a profound moment of cognitive dissonance for many meat-loving people around the world. Our beloved hot dogs and bacon, we were told, have such strong evidence against them that they are put in the same category as asbestos and cigarettes.

While the rationale behind the finding was goofy, focused almost entirely on chemicals in the meats that can be related to cooking, it reverberated throughout news outlets around the world for days. Now everyone knows that a 5 year old kid eating a hot dog has some uncomfortable similarities to a 5 year old kid smoking a cigarette.