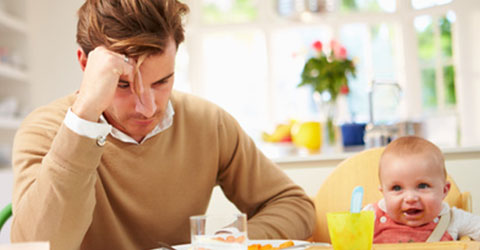 Are Vegetarian Diets Linked to Depression in Men?

A new study from the University of Bristol in the UK in collaboration with the Section on Nutritional Neurosciences of the National Institutes of Health links vegetarian diets with depression. This article has been released online ahead of print and will appear in the January 2018 edition of the Journal of Affective Disorders[1]. So should those eating a plant-based diet be concerned about increasing their risk of depression?

In this study, the researchers collected data on nearly ten thousand men in England. On a single occasion, these men were asked to complete a postnatal depression questionnaire. In addition, the men completed a questionnaire about how often they ate certain foods and asked if they identified as either vegan or vegetarian.

This type of study is called a cross-sectional, observational study. Data is collected on a single occasion only (a cross-section) and researchers try to ‘observe’ if certain parameters are ‘associated’ with each other. In this study, the researchers observed that vegetarians had higher depression scores, even when they accounted for important, non-dietary factors such as age and cigarette smoking.

Cross-sectional studies are important but have limitations and ultimately provide only one type of evidence. We can think of cross-sectional studies as a chicken and egg scenario. Did the vegetarian diet cause depression? For example, were the vegetarians in this observational study eating a junk food diet high in sugar, salt and saturated fat which may indeed contribute to depression? Or did the depression cause people to try a vegetarian diet in the hope that it might help? Or is there another factor associated with vegetarian diets which can contribute to depression e.g. food preparation time? Another possibility is that the tools used (questionnaires) were not accurate enough and did not tell us the full picture so there may be no association between vegetarian diets and depression at all! For example, the average depression score in vegetarian men was 5.26 vs. 4.18 in non-vegetarians. Although this difference was statistically significant, it is not a huge difference, particularly when a score of >10 indicates high probability of mild-moderate depression.

Twice in the online version of the article, the authors suggest that ‘nutritional deficiencies’ or ‘reverse causation and residual confounding’ can explain their findings. Let’s look at each of these possibilities in turn. The researchers suggest that a deficiency of vitamin B12 or iron may explain the association with a vegetarian diet and depression. It is easy to avoid both of these deficiencies with a whole food, plant-based diet by consuming fortified products and/or taking a B12 supplement as well as consuming iron rich foods (legumes, green leafy vegetables). Nevertheless, it is entirely possible that the vegetarians in this particular study did have nutrient deficiencies. However, the researchers did not measure these nutrients so any comment on this is purely speculative.

The researchers correctly mention that reverse causality might explain the association between depression and vegetarian diet. This means that instead of assuming that a vegetarian diet contributes to depression, perhaps depression contributes to vegetarian diet. For example, perhaps people who were depressed decided to go vegetarian in the hope that it might improve their mood. Because this was an observational study and data was only collected on a single occasion, this study can not tell us. The researchers also suggest that the association may be due to ‘residual confounding’. This means that the association between vegetarian diets and depression may be due to a separate factor which they did not measure. For example, perhaps vegetarian men spend a lot more time preparing vegetarian food for themselves and therefore less time with their partner and baby which leads to a depressed mood. In this example, the vegetarian food is not causing the depression and the results would be very different if, for example a food delivery service was used. Again, from this single observation study we can not know if residual confounding was important.

How does this study fit into existing evidence?

An earlier observational study involved around 1,000 Australian adults but did not include any vegetarians. This study observed that both high and low intake of red meat were associated with depression and anxiety[2].

However, the results of other observational studies have demonstrated that a plant-based diet was associated with better mood i.e. in direct contrast to the current study[3][4][5][6][7]. Further, intervention trials since 1986 have demonstrated that altering dietary intake towards plant-based patterns can actually reduce depression[7], a finding which was reported again more recently[8].

If the findings from the current study are replicated and well-designed intervention studies demonstrate that eating more animal products and less whole plant foods can reduce both depression and anxiety then we will need to revisit this association.

Until then, keep eating whole plant foods with a broad smile as I am not aware of any trial suggesting that a whole food, plant-based diet contributes to depression.