Topics » Disease » Which Came First: The Chicken, the Egg, or the Dystopian Nightmare?

Which Came First: The Chicken, the Egg, or the Dystopian Nightmare?

The National Chicken Council (NCC) is a special interest group representing the chicken industry in the United States.[1] According to them, “[Chicken is] one of the most successful sectors in agriculture. In a little over 50 years, the U.S. broiler industry has evolved from fragmented, locally oriented businesses into a highly efficient, vertically integrated, progressive success story.”

That’s their story, and they’re sticking to it.

They’re also paying for it. For decades, NCC has consistently ranked near the top of all organizations that have contributed to campaigns or lobbied in Washington.[2] They have spent many millions to buy the favor of politicians—both Republicans and Democrats—over the years, and that investment continues to pay off in various ways.

You might have heard of “ag-gag laws,” a notorious tactic for protecting the interests of industrialized animal farming operations.[3] They do so by criminalizing investigative reporting and whistleblowing activities at farming operations. In effect, these laws criminalize transparency. Many states have tried to pass such laws, and several have succeeded. Still, there has been resistance: in 2015, the US District Court struck down Idaho’s ag-gag law on the grounds that it violated constitutionally protected rights of free speech and equal protection.[4]

The animal agriculture industry does not want you to know how the sausage gets made. Whenever possible, they attempt to hide their operations from the public. Some of those attempts are surprisingly brazen, their claims so obviously dubious. It’s as if they don’t expect us to do the most basic research.

For example, according to NCC: “The chicken industry has developed a specific set of expectations that will ensure that the birds we raise are taken care of with the highest standards starting at hatch.”[5] To help with that, they’ve developed Animal Welfare Guidelines, which have been certified, “after a significant review process,” by the Professional Animal Auditor Certification Organization (PAACO). “With this certification, consumers and customers can feel confident that when buying and eating chicken, the birds were well-cared for and treated humanely.”

What do all these sustainers have in common, if not a legitimate concern for animal welfare?

The Values of NCC

There is, surely, only one thing NCC genuinely cares about—maximizing profit for the industry they represent. They are an engine designed to generate money. When they aren’t investing in shaping the thinking of politicians; when they aren’t making ludicrous claims about animal welfare; they are often making projections about profitability.

These trends reflect more than consumer demand. They are the measure of a massive system of violence. And the consequences are not discussed often enough. 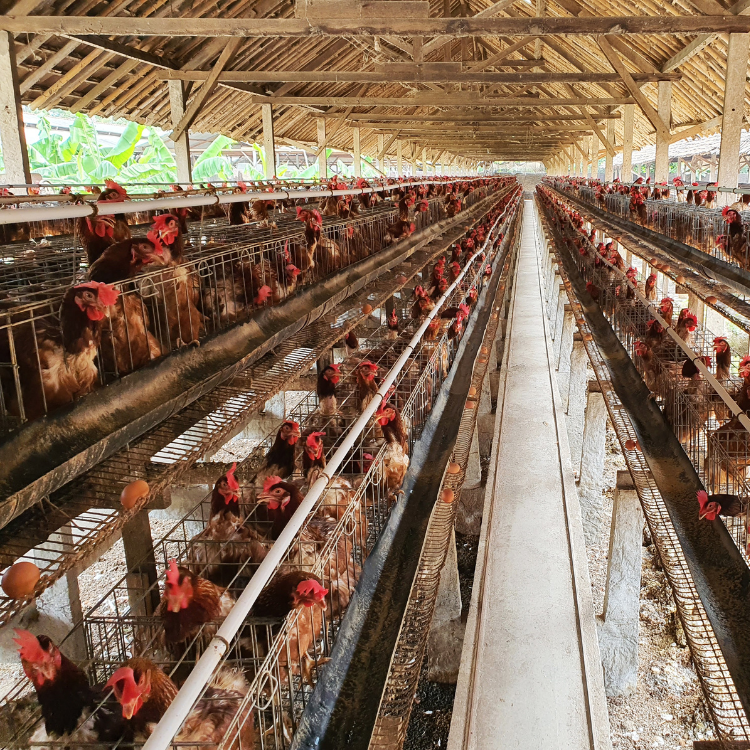 Inside an Industrial Chicken Operation

Frank Dixon has done an excellent job of detailing the excruciating conditions found in industrial chicken facilities. In his book, Sustainable Food Production & Diet, he describes how these factory farming conditions are unhygienic, inhumane, and potentially catastrophic:[12]

Birds are packed together with little room to move. In broiler chicken operations (i.e. chicken raised for meat), 20,000 to 30,000 day-old chicks often are placed on wood shavings or other litter material in a barren shed. As the chickens grow, the space between them decreases until there is little to no room to move. Egg-laying hen operations sometimes confine over 100,000 hens per shed. Hens often are placed in battery cages (up to ten hens per cage). Then, the cages are stacked on top of each other. Hens need 291 square inches to flap wings, 197 square inches to turn around, and 72 square inches to stand freely. US commercial battery facilities provide an average of 64 square inches of space per hen. Living conditions create great stress in part by preventing birds from engaging in natural behavior. Hens often beat off half of their feathers by flapping their wings against cages.

Chickens often fight when crowded together. To minimize injury, beaks and toes often are cut off. This causes pain and stress. Cattle and chicken remains often are fed to chickens, which are not naturally carnivores. This can facilitate the spread of viruses and other pathogens. Industrial chicken operations have widespread fecal contamination. One gram of chicken manure can contain enough virus to infect one million birds. A 20,000-bird broiler flock produces more than one ton of feces per day. Feces often is not removed until chickens are slaughtered. As a result, growing birds live among an increasing amount of their own feces. Broiler sheds sometimes are not cleaned out between flocks. When this occurs, new chicks are placed directly on tons of feces from previous flocks. Living in feces greatly facilitates virus transmission and mutation.

Broiler chickens are bred to grow larger more quickly. Ancestor chickens grew to about two pounds in four months. Broiler chickens now grow to about five pounds in 45 days. Birds bred for size often cannot support their own weight. The stress on their hips and legs often is so great that they spend more than three-quarters of their time lying in their own feces. Ancestor hens laid about 25 eggs per year. Industrial hens are bred to lay over 250 eggs per year. Breeding chickens to have more breast meat or egg-laying ability diverts resources from other body parts and systems, including the immune system. Chickens often outgrow their hearts and lungs. About one to four percent of broilers die of heart failure. Breeding for size and egg-laying ability produces birds with weaker immune systems. This further facilitates virus transmission and mutation.

Industrial broiler chicken sheds usually do not have windows. The sheds usually are nearly constantly lit at low light levels (about five percent of normal office lighting). Nearly constant light accelerates growth, while dim light minimizes activity. Brighter light makes chickens more active. As a result, they burn energy by moving instead of growing. Keeping broiler chickens in near darkness results in more efficient conversion of feed to meat or eggs. Sunlight makes birds healthier, dries out feces and kills pathogens. Keeping sunlight out of broiler chicken sheds allows feces to remain moist for extended periods of time. H5N1 and other pathogens can survive for weeks in moist feces. As a result, keeping sheds nearly dark facilitates virus transmission and mutation. Egg-laying hen sheds, on the other hand, usually are kept constantly lit at higher light levels because this maximizes egg production.

No wonder there has been such a push for ag-gag laws: such nightmares are enough to unsettle almost anyone’s appetite.