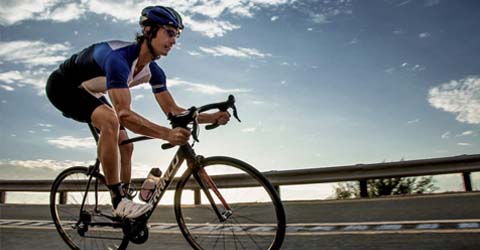 Ironman Brendan Brazier Is a Pioneer In Plant-Based Sports Nutrition

Brendan Brazier is way ahead of the game. As a former professional Ironman athlete and two-time Canadian 50km Ultra Marathon runner, he’s had his eyes on the prize since he was a young teen (he’s in his 40s now, though no one would guess by the look of him). Growing up constantly in motion, Brendan discovered the power of dairy-free, plant-based nutrition when he was just 15-years-old in an attempt to increase his athletic performance. Now a best-selling author, serial entrepreneur, editor-in-chief, and accomplished athlete, Brendan is considered one of the world’s leading experts on plant-based performance nutrition. Never one to pass up an opportunity to champion the cause, Brendan sat down with Switch4Good to offer up his dairy-free success story.

Brendan grew up in Vancouver, Canada eating the typical Western diet. While he admitted that it might have been “slightly healthier” since his mom was a nurse, his description of his childhood diet was “typical,” and “basic.” Like many kids, he dove into soccer at an early age, getting his first taste of organized sports. He later transitioned to hockey during his teen years, ultimately finding running, cycling, and swimming in quick succession—the sports that ultimately built his professional athletic career. He found a passion for these disciplines and knew he wanted to pursue endurance professionally, even in high school.

“I really like the fact that the longer the race, the more hard work and perseverance matters, and the less talent matters,” Brendan explained. He continued, “Shorter races can favor those who are more talented, but for a longer race you have to put in the time—there’s no way around that.”

With a clear goal in mind, Brendan began experimenting with nutrition at 15-years-old. He soon ditched dairy and adopted a plant-based diet, and over the course of trial and error, began to notice significant improvements in his performance—recovery, in particular. He was just a teenager, but with the multidisciplinary training he was subjecting his body to, he still found a great reduction in inflammation after ditching dairy. “Reducing inflammation helps with recovery, increasing mobility, range of motion … I experienced a noticeable difference, and it allowed me to work harder because my body recovered more quickly,” Brendan stated. He came up with a recipe for a dairy-free beverage called his “blender drink,” which eventually turned into Vega—his successful sports nutrition line.

Brendan can claim to be a professional in several disciplines—endurance events, business, sports nutrition, publishing … his accomplishments seem to know no bounds. His professional career began in the world of endurance; he knew that was his calling straight out of high school, so he trained and raced for several years, working up to the formidable Ironman distance. He entered his first professional race at the age of 23 after a few years in Europe participating semi-professionally in duathlons. He devoted the next seven years of his life to the sport with a focus on the Ironman, creating a solid reputation for himself as a successful dairy-free and plant-based athlete.

Though Brendan has expanded his profession past the pro-racing circuits, he is still impressively active and still focused on nutrition in every single one of his pursuits. The onslaught of questions he fielded when asked about his diet led to a self-published book, Thrive, in 2004, which later led to an extended version published by Penguin that launched the best-selling Thrive series. He also launched a Thrive magazine, which he serves as editor-in-chief, and collaborated with celebrity chef Matthew Kenney to create a hands-on, plant-based sports nutrition course. He also recently launched a raw fermented juice company, 101 Cider House, that claims to contain 0 grams of sugar but all the benefits of probiotics … plus 6.7 percent alcohol for a bit of buzz.

When asked what he is most proud of, in regards to athletics, he noted the second marathon he ever ran. It was 1998, and it was his fastest to date. “You don’t forget your first marathon, or your fastest,” Brendan said. As for the business side of things, Brendan beamed when he brought up Vega. When the company first started, dairy-free protein powder was virtually unheard of, and plant-based was not “cool.” He took a major risk, and through persistence and hard work, it turned into one of his proudest accomplishments.

Beyond ditching dairy, Brendan had a final piece of advice to share: “If you’re afraid of failure—whether it’s in running or doing a triathlon or being an entrepreneur—then it’s probably not for you, because there’s a lot of failure involved. You just got to learn from your mistakes and try again.”

Fiona Oakes Has Extreme Grit – Interview With a...

The Alkaline Advantage How pH Promotes Optimal Health and...