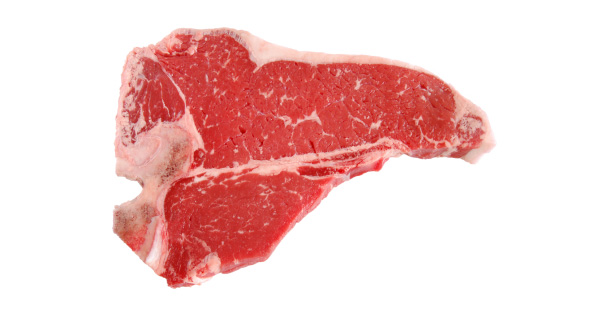 Muscling Out the Meat Myth

It’s my guess that there’s hardly another myth in nutrition so insidious yet so intractable as that which encourages us to believe that consuming lots of high-quality protein – basically the stuff of animal-based foods – makes for fitness, bigness, and strength of body. Rooted in antiquity, this myth began to sprout in the minds of men (especially men, it seems) long before protein was identified and named.

The myth took root in the belief that we could get our strength, our agility, and our ability to soar to unimaginable heights if only we consumed the flesh and bodies of animals. Much later, in the early nineteenth century, when scientists identified protein as being more or less equivalent to the flesh of the animals they worshipped, it was heralded as the treasured nutrient. In the words of the famous chemist Justis von Liebig, it was none other than the very “stuff of life itself.”

Quality Protein by Whose Standards?

Around the beginning of this century, scientists came to believe – erroneously – that animal proteins led to improvements in sport competitiveness. This was combined with their stand that animal flesh, milk and eggs spurred body growth more “efficiently” than plant protein. Efficiency, in this sense, meant that by eating animal protein one could gain more body weight per pound of protein consumed. High “efficiency of utilization” occurs with animal protein because the proportion of amino acids (the building blocks of protein) in animal muscle most closely match the proportion of amino acids needed to synthesize protein in our own bodies. We know now that this may be a drawback, but at the time the scientists equated -efficiency of utilization” with “quality,” a bias that persists today.

Efficiency, or high quality, can also mean speeding up all manner of body functions. It can mean stepping on our accelerators, putting the “pedal to the metal.” And, like most other things pushed to their limits, there’s a cost to pay, such as soaring rates of chronic diseases including heart disease, cancer, diabetes and osteoporosis.

Consuming “high-quality” animal protein was taken by these early father figures in nutritional science to mean “civilization itself.” And so itwas in this climate that their scientifically based recommendations began encouraging very high intakes of around 110 – 130 grams of animal-based proteins a day.

At the beginning of this century, the majority opinion generally held that the more we consumed of this “high-quality” nutrient, the better.

However, there was some dissenting opinion, soon to be maligned or forgotten. And it is this generally forgotten bit of history that is my main point. A certain Professor Russell Chittenden was, in the late 1800s and early 1900s, a very distinguished professor of physiological chemistry at Yale University. He wondered whether consuming diets very much lower in high-protein foods (i.e. much lower in intakes of animal-based foods) would bring about undue fatigue and loss of mental and physical fitness. What concerned Chittenden were the claims that a generous consumption of animal protein could really make for strength, endurance and “manly” qualities, as some were saying.

Initially, he organized an experiment to see if eating less protein and animal food would really make him and his colleagues weaker and less able to put in a good day’s work. To the contrary, he found that their health, vigor and overall fitness were considerably improved.

Next he undertook a more complete six-month experiment with a detachment of military men who were just entering their training and who were accustomed to eating very large quantities of protein-rich meat. He switched their diet to one containing only about one-third their customary intake of protein. This he did by substantially reducing but not entirely eliminating meat, clearly establishing that this low intake of protein was adequate to maintain their usual needs for protein. He also subjected them to a series of 15 strength and fitness tests. The average score for all 15 tests at the beginning was about 3000 and the final score was about 6000. Without doubt, this improvement is quite remarkable.

But Chittenden’s critics said that this did not necessarily prove his point because these soldiers very likely might have gained even more during this training period if they had, instead, consumed animal-protein-based diets. So, Chittenden obliged his critics by organizing yet another experiment, this time with well-trained athletes in the “pink of condition,” as he put it. Accustomed to the typical meat-containing diet, these athletes already were, understandably, at about the same level of physical fitness as the physically fit military men. And guess what? By switching to largely plant-based diets from January to June these athletes improved by about 35% in just five months. In this case, only the dietary change could have accounted for these remarkable results.

Chittenden was one of the leading scientists of his day. He worked at a leading university, he was president of the American Physiological Society, and he had published on a wide variety of technical topics in nutrition prior to these well-conducted experiments. This man was no shrinking violet in scientific research.

Wouldn’t you have thought that his research, now almost 100 years old, would have been accepted? Or at least reexamined by others to see if such spectacular results were true? Not on your life. What awaited Chittenden was mostly scorn from his colleagues and it was not until the 1940s, when the daily recommendation for total protein intake was decreased, that his work was partially vindicated. However, even then, the recommendation for protein intake of the animal kind still held sway. And up till today, the average American gets 60 – 70% of his or her protein from animal sources – mostly without realizing that this practice largely arose from the false premise that animal protein improves physical fitness and sport competitiveness.

I said earlier that this story had its insidious aspects. So strong has been the belief in the physical fitness value of animal-based protein that today we struggle in science to uncover the clear messages from the data that seriously question our beliefs about animal protein. Indeed, some scientists, who have major influence within United Nations advisory groups, continue to develop technical arguments favoring higher recommendations for protein.

In China, I was surprised to learn some years ago from my colleagues that they had – and still have – the highest dietary protein recommendations of any country in the world, mostly for the presumed purpose of improving athletic performance in the Olympics. This seems especially ironic considering that it was well known in ancient Greece that Olympic athletes performed best when they ate plant-based diets. As well as the fact that some of today’s athletes, such as Dave Scott, six-time winner of the Ironman triathlete, and Carl Lewis, seven- time gold medalist Olympian sprinter, train and compete on plant-based diets.

It is not that animal protein cannot be utilized for good effect, especially when nothing else may be available, or that this nutrient does not build muscle mass. It does. But so does plant protein. And it does so with superior results. If only we had remembered and understood Chittenden’s work we might not be paying such dire health consequences today.