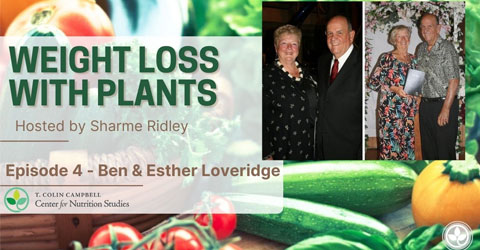 Esther has a passion for sharing the secret of her dramatic weight loss story. She believes it is never too late to begin a journey toward health. She took her first step at the age of 72 by following the McDougall Program for Maximum Weight Loss, a plant-based diet. Esther has been designated as a “Star McDougaller” and her success story appears on Dr. McDougall’s Health and Medical Center website. After witnessing her success, Esther’s husband Ben followed suit and fully embraced this way of eating. Esther has a BA in psychology and is the administrator of Esther’s Nutritional Journey on Facebook where she supports thousands of followers on a daily basis with her inspiring words of encouragement.

Losing weight is hard for many people, and keeping it off can be even more challenging. Following a whole food, plant-based way of eating, however, could hold the key to finally being successful. Weight Loss With Plants, hosted by Sharme Ridley, EdS, is a biweekly video series that showcases everyday people who have found success through the power of plants. Each episode will introduce to you someone who has triumphed over struggles with obesity and associated health issues.