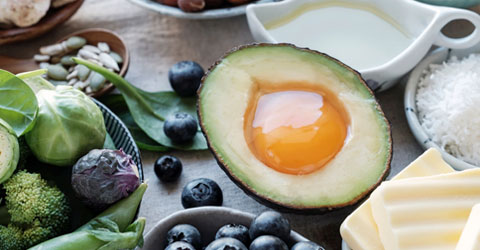 So far in this series, I’ve discussed the origins of the ketogenic diet and the biological role of ketone bodies (Part 1), whether living in a state of ketosis is normal and natural (Part 2), and whether ketogenic diets are effective for weight loss (Part 3). In this post, I’m going to explore one of the major health claims made for ketogenic diets, that they reverse insulin resistance and effectively treat diabetes.

Claims that ketogenic diets effectively treat diabetes are rife on the Internet and in popular books. Keto enthusiasts claim that carbohydrate consumption is the cause of the insulin resistance that drives type 2 diabetes[1].

Insulin resistance is known to be an important risk factor for the development of the complications of diabetes[2], both microvascular – diabetic eye (retinopathy), nerve damage (neuropathy) and kidney disease (nephropathy) – and macrovascular – coronary artery disease, peripheral artery disease, and stroke. Ketogenic diet advocates argue[3], removing carbohydrates from the diet effectively treats the cause of diabetes and its complications: “insulin resistance functionally manifests itself as ‘carbohydrate intolerance’. When dietary carbohydrate is restricted to a level below which it is not significantly converted to fat (a threshold that varies from person to person), signs and symptoms of insulin resistance improve or often disappear completely”.

Children and young adults put on ketogenic diets to manage epilepsy were found to have higher arterial stiffness parameters, an early marker of vascular damage.

There are certainly studies which demonstrate the effectiveness of ketogenic diets for reducing various markers of diabetic control. For example, one study[4] compared a ketogenic diet with “unlimited amounts of animal foods (i.e., meat, chicken, turkey, other fowl, fish, shellfish) and eggs, limited amounts of hard cheese (e.g., cheddar or swiss, 4 ounces per day), fresh cheese (e.g., cottage or ricotta, 2 ounces per day), salad vegetables (2 cups per day), and non-starchy vegetables (1 cup per day)” to a low-glycemic, reduced-calorie diet and found the ketogenic diet superior in reducing blood glucose, hemoglobin A1C, and fasting insulin levels along with reductions in injected insulin and oral diabetes medications.

But there are multiple lines of evidence contradicting the ‘carbs cause diabetes, so low-carb cures diabetes’ belief.

What Does the Science Say?

First, most intervention studies on ketogenic diets are short-term, but the limited evidence available from studies with longer follow-up periods indicates that the beneficial effects of ketogenic diets on biomarkers dissipate over time, long-term adherence is difficult, and there are higher rates of kidney stones, osteoporosis and hyperlipidemia[5].

Then there are epidemiological, or population-based studies, which consistently demonstrate that reducing carbohydrate intake increases the risk of diabetes:

In intervention studies, low-fat plant-based diets have been found to be superior to conventional diabetes diets which restrict carbohydrate intake.

It’s been known since the 1930s that dietary fat decreases insulin sensitivity[15] – or to put it another way, causes insulin resistance. Among the various types of dietary fat, the saturated type found mostly in animal products but also in coconut and palm oils has the worst effect on insulin sensitivity. Epidemiological studies indicate that “subjects with higher intakes of fat are more prone to develop disturbances in glucose metabolism, type 2 diabetes or impaired glucose tolerance, than subjects with lower intakes of fat.” Additionally, experimental studies clearly demonstrated that diets high in fat impaired insulin sensitivity, while diets low in fat but high in carbohydrates improved it[16].

The underlying mechanism in insulin resistance is characterized by accumulation of lipids (fats) in muscles, the liver and eventually the pancreas:

These 3 pathological manifestations of insulin resistance are driven by ‘positive energy imbalance’[19] – that is, consuming more energy than we use in our daily activities. A whole food, plant-based diet – high in unrefined, complex carbohydrates and low in fat – is, as mentioned in Part 3 of this series, the most effective dietary intervention for long-term weight loss published in a peer-reviewed journal[20]. Even when instructed to eat ad libitum (that is, until they were full, with no portion control) and without being asked to increase their exercise level, overweight and obese participants in the BROAD Study were able to achieve average weight losses of 12 kg in 1 year.

Which Diet Is Best for the Long-Term Health of Diabetics?

Finally, it’s important to note that diabetics don’t die of diabetes per se; they die from its complications. The major cause of death in diabetics is cardiovascular disease, and a low-fat, whole food, plant-based diet is the only diet shown to reverse coronary artery disease[21].

On the other hand, children and young adults put on ketogenic diets to manage epilepsy were found to have higher arterial stiffness parameters[22], an early marker of vascular damage. This fact alone should be enough warning about the long-term risks of ketogenic diets, and encourage the use of low-fat, plant-based diets as the gold standard for diabetes management.

In summary, human populations living on high in complex carbohydrate, low-fat diets comprised primarily of minimally processed plant foods have historically enjoyed extremely low rates of diabetes. When they make the ‘epidemiological transition’ to a Western-style diet, which inevitably means a reduction in complex carbohydrates and an increase of animal and refined plant foods (including fats, oils, flour and sugar), their diabetes rates soar.

While ketogenic diets may lead to temporary improvements in glycemic control, they lose their effectiveness over time, are fundamentally unnatural to humans, and are unable to prevent the life-threatening complications of diabetes.

Why take the risk of a ketogenic diet, when a whole food, plant-based diet is a delicious, sustainable and proven method of preventing, managing, and even reversing diabetes?

Part 1 – What Is the Ketogenic Diet?

Part 2 – Is the Ketogenic Diet Natural for Humans?

Part 3 – Does the Ketogenic Diet Really Work for Weight Loss?