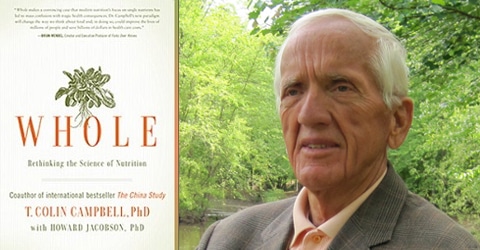 “Normal science means anything that doesn’t challenge the prevailing paradigm – the agreed-upon story of how the world is.” – Page 27

“One of the most devilish things about paradigms is that they’re almost impossible to perceive from the inside. A paradigm can be so all-encompassing that it simply looks like all there is.” – Page 27

Science and Its Profit-Driven Prison: An Illustration

In chapter three of Whole, Dr. Campbell pulls back the curtain once more, this time revealing the limitations of scientific research when it is conducted in the confined paradigm of reductionism. Reductionism, as he explains, is the dominant paradigm of science today. It is “normal” science, and it is normal to not question its dominance.

Dictionary.com defines science as the “systematic knowledge of the physical or material world gained through observation and experimentation.”[2] It is based on research, and it impacts governmental and social policies. What this definition does not include are the commercial endeavors that have taken over science. In the health sciences, the commercial enterprise of science has taken over. It includes “science” for the creation and promotion of supplements, pharmaceuticals and expensive treatments. And there’s a big difference between this “normal” and true science.

We don’t have to look back far to see that normal is not always best. Two “normal” treatments for illness which have gone the way of the dodo are bloodletting and lobotomies. However, their extinctions from “normal medical practice” took time—and a lot of pain on the part of unknown numbers of people who endured these cruelties. Bloodletting as a treatment “[spanned] at least 3000 years,” and was only discredited in the late 19th century[3]. It was employed as part of a treatment plan for both George Washington and Charles II; both died shortly after being treated. It takes time for misinformation to be discredited by research and study and fact.

Why does it take so long for widely believed “truths” to change, even when scientific research supports said change? In 1995, Kerridge and Lowe argued that the long survival of bloodletting was not an intellectual anomaly; instead, “it resulted from the dynamic interaction of social, economic, and intellectual pressures, a process that continues to determine medical practice.”[4] In 2020, those dynamic pressures continue to impact what society as a whole believes to be true, perhaps even more than ever with our social media bubbles of reality allowing misinformation to permeate and spread like a disease.

Lobotomies, like bloodletting, were also accepted practice. They were used as a “radical therapeutic measure to help grossly disturbed patients with schizophrenia, manic depression and mania (bipolar disorder), and other mental illnesses.”[5] Results were inconsistent and some patients died from the procedure, but “those effects were not widely reported in the 1940s, and at that time the long-term effects were largely unknown. Because the procedure met with seemingly widespread success, Moniz was awarded the 1949 Nobel Prize for Physiology or Medicine (along with Swiss physiologist Walter Rudolf Hess).”[5] Once again, the dissemination of misinformation won the day, and continued to win the day well into the 1960s.

Thank goodness science took the time to question and challenge those “known” cures. It may be time once again to stretch out of the comfort zone and get on the outside of the paradigm in order to see it as a whole. Like the doctors misdiagnosing the elephant (seeing only the tail or the trunk and assuming it to be the whole), reductionist scientists are missing the whole being and focusing on just its tail.

Not all old timey cures have gone the way of the dodo bird. Slowly we may be coming back to what was once “known” by word of mouth to what is “true” through the scientific research in nutritional studies. When I was ill my father would present me with a plate of random slices of “medicine.” There was one slice each of red pepper, red onion, ginger root, turmeric root and one clove of garlic and I washed it all down with a hot drink of water and whiskey. I would sleep for a few hours, my body sweating and shaking. I would wake up, take a shower and was surprised to realize that I was quite a bit less sick. Nutrition, not drugs. Thanks dad. Funnily enough, scientific research is proving out my father’s remedy. Well, maybe not the whiskey part! I only wish he could know how much he knew.

But ultimately, science is an explorer. A curious spirit seeking truth, not wealth, power, or glory. If it cannot even question itself, what will it achieve? It is time to break the chains of reductionism and free science from its profit-driven prison. It is time that science be allowed to explore all its curiosities—knowledge comes as much from mistakes as it does from successes, but not if we aren’t willing to explore our mistakes.

Whole picks up where The China Study left off. The China Study revealed what we should eat and provided the powerful empirical support for this answer. Whole answers the question of why. Why does a whole-food, plant-based diet provide optimal nutrition? Whole demonstrates how far the scientific reductionism of the nutrition orthodoxy has gotten off track and reveals the elegant wonders of the true wholistic workings of nutrition, from the cellular level to the operation of the entire organism. Whole is a marvelous journey through cutting-edge thinking on nutrition, led by one of the masters of the science.

This article series is intended to provide thought provoking quotes from the book Whole in order to encourage discussion amongst its readers. Please leave your thoughts or answers to the discussion questions in the comment section below.