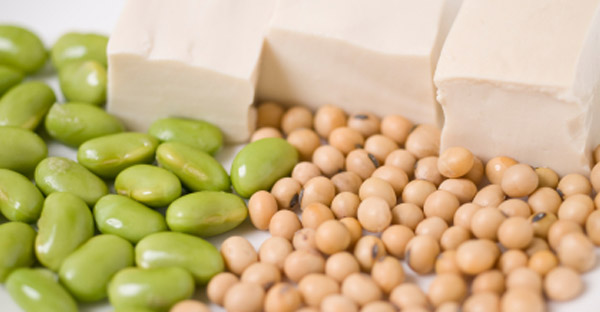 In view of the recent news on the health benefits of soy protein, what do we find in our China Project?

Since China is one of the leading producers and consumers of soy products in the world, their use of this food may be of special interest.

First, recall that our survey included a total of 65 mostly rural counties across the far reaches of the country, with two villages of 50 families each being surveyed in each county. Also recall that disease rates and diets varied enormously from area to area, thereby creating very distinct geographical patterns for heart disease, various cancers and so on. Because most rural Chinese rarely move to other areas and they eat mostly the same kinds of food throughout their lives, we find an almost perfect experimental setting to compare diet, lifestyle, and disease characteristics.

Although consumption of soy products was not measured independently of other legume intakes, this does not compromise our question very much because soybeans comprised, on average, about 80% of the total legumes actually consumed. In fact, the Chinese word for soybean is “tatou,” meaning “the greater bean.”

Total legume intake in China ranged from virtually nothing in a few counties to average daily intakes of 55-58 g/day for three counties (about two ounces, fresh weight). Surprisingly, average intakes across the whole of China were not as high as we had expected. We should recognize, however, that the survey included mostly rural counties where legumes have often been considered more of a luxury food than a regular staple. Thus, any cholesterol-lowering effects of soy protein itself are largely buried within the total diet effects and would be difficult to dig up.

In a nutshell, the data from rural China are not as discriminating for soy protein effects as were the controlled trials of other studies recently reported in the New England Journal of Medicine. The China Study, nonetheless, represents what is seen under very practical conditions. While not astounding, we did find what we expected, namely, the eating of legumes (mostly as soy) is associated with lower blood cholesterol levels and lower heart disease rates. The most remarkable feature of these data is the fact that this cholesterol-lowering association with increasing intakes of protein was observed among people whose blood cholesterol was already quite low.

Soybeans contain more than 100% of the dietary requirements of the essential amino acids lysine, methionine, and cystine, threonine, and tryptophan. They are the only beans whose proteins are considered “complete.” One cup of cooked soybeans contains as much protein as a serving of meat, fish, or poultry.