Thank you! Our enrollment specialist will connect with you soon. 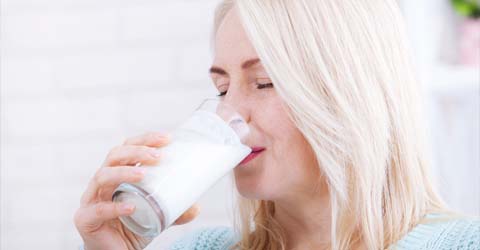 In an attempt to offer sound advice, Camilla the Duchess of Cornwall warned the younger generations against “ridiculous” fad diets—specifically those eliminating dairy—as a precaution to the onset of osteoporosis. This well-intentioned yet misled comment was given at a press conference for the Royal Osteoporosis Society and heard around the world thanks to the lightning speed of international online media. Unfortunately, the Duchess’ words may lead to the increased risk of osteoporosis and other preventable diseases, as dairy is more of a hindrance to health than a help. In a manuscript titled, “Should Dairy Be Recommended as Part of a Healthy Vegan Diet?” within The American Journal of Clinical Nutrition, Volume 89, Issue 5, author Amy Joy Lanou, PhD came to the revolutionary conclusion that dairy is not a health food. Read on to discover why.

Dairy Is Not the Only Source of Calcium

Lanou, PhD, chair and professor of health and wellness as the North Carolina Center of Health and Wellness at the University of North Carolina Asheville, opens her manuscript with a strong statement. “Milk is unnecessary,” she writes in a bold subhead. To support this claim, Lanou points out that calcium can be found in a variety of plant-based sources, and it is also more bioavailable to the body. The human body can only absorb 32% of the calcium in milk, whereas the body can absorb 40—64% of the calcium found in beans and most greens [1][2]. While milk is perhaps the most highly promoted source of calcium in western countries, this does not mean it is the only source. Kale, tofu, white beans, mustard greens, bok choy, and sesame seeds are just a few examples of calcium-rich foods with high nutrient bioavailability.

Still, the relationship between milk and strong bones is ingrained in the eyes of the public, and Lanou strives to right this misconception. She writes, “Evidence collected during the past 20 years shows that we need to rethink our strategies for building and maintaining strong bones throughout our lives.” According to her research, no studies have successfully proven a benefit to bone health by drinking milk. She cites several examples, including a Harvard Nurses’ Health Study that followed over 75,000 women for 12 years and another Swedish study that followed over 60,000 women over 11 years. Neither study could prove a decreased risk of fracture coupled with an increase in milk consumption [3][4]. Dairy, or a daily calcium intake over 500 mg, does not have a beneficial effect on children’s bones, either, according to Lanou’s research. Among many studies, she cites a meta-analysis of calcium supplementation in which the researchers concluded that added calcium, “is unlikely to result in a decrease in fracture risk of major public health significance either in childhood or later life” [5].

Further, excessive amounts of calcium can have a negative effect on one’s health. Hip fracture rates are highest in countries with the highest calcium consumption [6]. In 2014, the British Medical Journal released a 20-year study which followed 100,000 participants and found that women who drank three or more glasses of milk a day (per the USDA recommendation), had a 60% higher rate of hip fracture and doubled their risk of death [7]. In fact, the World Health Organization recommends countries with these high rates of hip fracture consume 400-500 mg of calcium per day in order to reduce the population’s risk of this incidence. This recommendation is far below the recommendations in Western countries, which have been inflated to protect the dairy industry and promote the continued over-consumption of dairy. For example, the United States Dietary Guidelines recommend between 800 mg for children (4—8 years),1000 mg for adults (19—50 years), and up to 1,300 mg for adolescents (9—18 years).

This relationship between high calcium intake and bone fracture suggests that the “calcium crisis” is far overhyped. With a balanced, plant-based diet, assuming one is eating enough calories, it is virtually impossible to not consume the more realistic recommendation of 500 mg per day. The marketing arm of the dairy industry has capitalized on creating mass concern over calcium and bone health, when in reality, too much calcium can make us sick.

Women who drank three or more glasses of milk a day (per the USDA recommendation), had a 60% higher rate of hip fracture and doubled their risk of death.

Along with 32% bioavailable calcium, milk and other dairy products also come with an array of serious health problems. Lanou cites prostate cancer, heart disease, and both type 1 and type 2 diabetes as potential outcomes for those who consume dairy. Further, the calories from dairy often replace those of plant-based foods, which may cause a person to miss out on the essential micronutrients, fiber, and antioxidants present in plant-based foods.

How to Maintain Strong Bones

Beyond reducing the amount of calcium in one’s diet to a manageable 500 mg per day, adopting a moderate exercise routine is another effective strategy to promote bone health and prevent osteoporosis [8]. Just a half hour of weight-bearing exercise five times a week can have a positive effect. Weight-bearing exercise includes walking, jogging, resistance and weight training, or any exercise that gets you on your feet (i.e. swimming and cycling are not considered weight-bearing).

Like all nutrients, calcium is important, but it is also important to not fixate on a specific nutrient or to overdose. Optimum health is achieved through a varied diet that includes a plethora of foods; it is not obtained by relying on a single source (ie dairy) that can also make us chronically ill. It is time to free ourselves of this calcium crisis and open our minds and palates to the rich abundance of plant-based foods.

How to Get Calcium Without Dairy

The 4 Keys to Strong Bones (Interview)