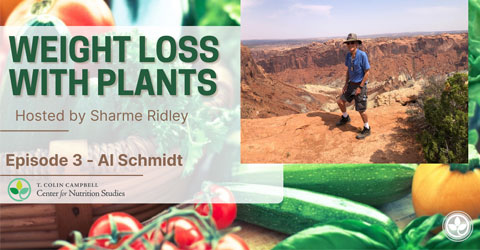 At the age of 80, Al Schmidt had end stage coronary artery disease and was a “cardiac cripple.” After a lifetime on the standard American diet, he went from being a semi-active senior to being housebound by pain and fear. With the aid of three books, he embarked on a whole food, plant-based (WFPB) lifestyle that drastically improved his health and well-being. He has spent the last five and a half years telling anyone who would listen (and some who wouldn’t) about the amazing healing effects of a WFPB lifestyle, which helped him to overcome heart disease, high cholesterol, poor kidney function, and he even lost some weight. He has told his incredible story to classes at the Renaissance Society at Sacramento State, the Sacramento VegFest, and at Kaiser Permanente. He has also appeared on Chef AJ’s YouTube show. His lighthearted attitude and amazing results will inspire and motivate you. His journey was not easy, but he says that if at 80 he could do it, anyone can.

Losing weight is hard for many people, and keeping it off can be even more challenging. Following a whole food, plant-based way of eating, however, could hold the key to finally being successful. Weight Loss With Plants, hosted by Sharme Ridley, EdS, is a biweekly video series that showcases everyday people who have found success through the power of plants. Each episode will introduce to you someone who has triumphed over struggles with obesity and associated health issues.