Topics » Disease » Can the Ketogenic Diet Cure Cancer? What Does the Science Say? 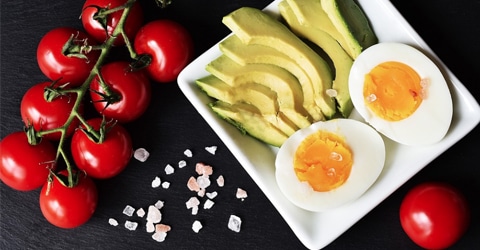 Can the Ketogenic Diet Cure Cancer? What Does the Science Say?

Previously in this series, I discussed the origins of the ketogenic diet and the biological role of ketone bodies (Part 1), whether living in a state of ketosis is normal and natural (Part 2), whether ketogenic diets are effective for weight loss (Part 3) and insulin resistance and diabetes (Part 4). In this installment, I’m going to examine the claim – now spreading like wildfire over the Internet – that ketogenic diets can cure cancer by starving cancer cells of glucose.

Here’s a typical example[1] of the claims made by ketogenic diet proponents:

The Evidence on Ketogenic Diets and Cancer

A 2017 systematic review of the published evidence for ketogenic diets in cancer[2] identified 15 studies (5 case reports, 8 prospective studies, and 2 retrospective studies). They wrote that “no study with a methodological[ly] rigorous design was found” and concluded that

“evidence supporting the effects of isocaloric ketogenic dietary regimes on tumor development and progression as well as reduction in side effects of cancer therapy is missing.”

Worryingly, they also commented that researchers appeared to under-report side-effects and downplay the decreased quality of life in cancer patients following ketogenic diets.

Another review, published in April 2018[3] concluded:

“The limited number of studies and differences in study design and characteristics contribute to overall poor quality evidence, limiting the ability to draw evidence-based conclusions.”

In fact, the authors’ extensive literature search identified a total of only 14 studies on the effects of the ketogenic diet in cancer patients published between 1988 and 2016, that included only 206 individuals. Five of the studies were simply case reports, considered the lowest level of evidence in medical research. Patients were put on ketogenic diets for anywhere from 5 days to 12 months. Nine out of the 14 studies assessed the effects of the diet on tumor metabolism and/or disease progression, and of these, two found that patients on the ketogenic diet had worse results, two showed diverse results among participants, four did not report any difference between treatments, and one demonstrated an alteration in cancer cell metabolism.

And a 2017 study conducted on pancreatic and lung cancer patients,[4] which was not included in either of the systematic reviews, had inconclusive results because most of the patients had difficulty complying with the diet, despite every effort made to help them comply and suffered from many mild to severe side effects due to it (constipation, fatigue, bloating, nausea, dehydration, esophagitis, hyperuricemia).

The Warburg Effect – Are All Cancer Cells Hungry for Glucose?

The notion that a ketogenic diet is an effective therapy for cancer rests on the observation that the mitochondria (‘power plants’) of cancer cells have reduced efficiency, resulting in a decreased energy yield from glucose. Known as the ‘Warburg effect’ after Otto Warburg, who won the 1931 Nobel Prize for Physiology or Medicine for discovering it, this metabolic inefficiency results in cancer cells taking up more glucose from the bloodstream.[5]

Bloggers and authors of popular books have distorted this observation into the oft-repeated claim that “sugar feeds cancer,” which forms the basis of advice to eliminate all forms of carbohydrate from the diet, including fruit, whole grains, and legumes (foods which have been shown to reduce the risk of developing cancer – see for example “Vegetables, Fruit, and Cancer Prevention: A Review,”[6] “Whole grain intake and cancer: a review of the literature”[7] and “Legume consumption and risk of all-cause, cardiovascular, and cancer mortality in the PREDIMED study.”[8]

It’s important to realize that the phenomenon we call ‘cancer’ is not a single disease. The defining characteristic of cancer cells is that they acquire multiple mutations in genes that make them immortal and that govern their metabolic pathways. Consequently, not all cancer cells are avid consumers of glucose, as ketogenic diet advocates claim.

In fact, in a study of 33 human cancer cell lines, all were found to express key ketolytic enzymes,[9] which enable them to take up ketone bodies and use them as fuel. The level of expression varied significantly between different cell lines, meaning that some cancer cell types have a stronger preference than others for using ketone bodies.

Some cancer cells show a strong preference for using ketone bodies, and they cause the body to make more ketones in order to fuel their growth. An oncogenic (cancer-causing) mutation in the BRAF V600E gene[10] activates MEK1, which stimulates the growth of cancer. Which types of cancer does this mutation occur in?

Researchers have also identified a ‘reverse Warburg effect‘[12] in which fibroblasts (connective tissue cells that produce the extracellular matrix, or stroma, in which all cells, including cancer cells, live) ‘feed’ ketone bodies to adjacent cancer cells, stimulating tumor growth and metastasis. The human MDA-MB-231 breast cancer cell line has been found to overexpress key enzymes involved in ketone metabolism.

Here is how the researchers described the two-way relationship between cancer cells and surrounding fibroblasts that increases the amount of ketones available to fuel tumor growth:

Another team of researchers concluded that “ketone bodies behave as onco-metabolites, and we directly show that the [ketolytic] enzymes HMGCS2, ACAT1/2 and OXCT1/2 are bona fide metabolic oncogenes.”[13]

This is a critical point, because conventional prostate cancer therapy includes androgen blockade, but androgen deprivation decreases the ability of prostate cancer cells to take up glucose from the bloodstream and use it as a fuel. This “decrease in the activity of the glycolytic pathway places prostate cancer cells under stress to generate energy in a quick manner in order to carry out necessary cellular functions. One avenue through which such an effect can be achieved is to increase energy production through the breakdown of fatty acids via the β-oxidation pathway” – that is, by using ketone bodies.

Ketone bodies were also found to increase the growth rate of HeLa cells,[15] a cervical cancer cell line that is extensively used in cancer research.

The cancer-controlling effects of ketogenic diets are often attributed to the ketone bodies themselves. For example, improved mitochondrial function has been found to inhibit cancer cell growth and reverse the resistance of cancer cells to chemotherapy drugs.[16] Ketogenic diet advocates credit the ketone body β-hydroxybutyrate (BHB) with being responsible for improving mitochondrial respiration.[17]

There is no evidence that a ketogenic diet protects against the development of cancer, and evidence for its benefits in cancer treatment is sparse and inconsistent.

However, research by Dr. Valter Longo and his co-workers on fasting and fasting-mimicking diets indicates that ketosis is not required to improve mitochondrial function and induce ‘differential stress sensitization’ (also called differential stress resistance) – a condition in which cancer cells are weakened and made susceptible to chemotherapy, while normal, healthy cells are strengthened and made resistant to it.[18] Instead, reduced levels of insulin-like growth factor 1 (IGF-1) and mechanistic target of rapamycin (mTOR) induce differential stress sensitization. Both IGF-1 and mTOR are reduced by fasting, and appropriate protein diets.

Fasting has been found to decrease side-effects and increase the tumor cell-killing effects of both conventional cytotoxic chemotherapy[19] and tyrosine kinase inhibitors.[20] Cycles of fasting followed by refeeding stimulate rejuvenation of stem cells, including those in bone marrow, allowing blood counts to ‘bounce back’ faster after cytotoxic chemotherapy.[21]

There is no evidence that a ketogenic diet protects against the development of cancer, and evidence for its benefits in cancer treatment is sparse and inconsistent. In stark contrast, a whole food, plant-based dietary pattern not only reduces the risk of developing cancer (both because of the cancer-fighting plant foods it includes, and because of the cancer-promoting animal foods that it excludes[22]), but also shows promise in treating at least certain types of cancer.

For example, a randomised controlled trial of a low fat, high complex carbohydrate plant-based diet (the direct opposite of a ketogenic diet) was shown to significantly decrease PSA (prostate-specific antigen) and dramatically reduce the risk of progression in men with early stage prostate cancer, and favorably affect a wide range of genes involved in cancer.[23]

Water-only fasting followed by a whole food, plant-based diet with no added sugar, salt or oil – again, high in complex carbohydrates, low in fat and relatively low in protein was shown to shrink lymphoma and maintain remission.[24]

In other words, the ketogenic diet is not conducive to human longevity, and does not offer the benefits that fasting (and plant-based diets) provide for cancer patients, in terms of reducing the side-effects of medical treatment and enhancing its effectiveness.

The extraordinary claim that ketogenic diets cure cancer is not supported by extraordinary evidence, but by a patchwork of conjectures and hypotheses about the metabolism of cancer cells.