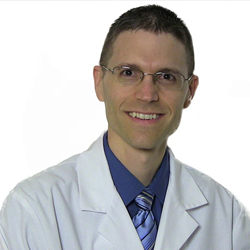 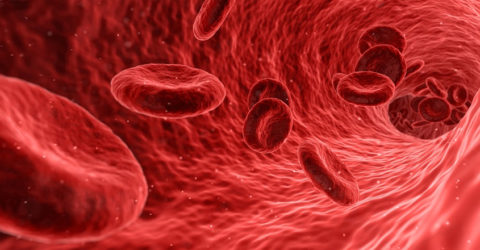 Iron deficiency anemia is caused by an iron deficiency in the body. Iron deficiency is the most prevalent nutritional deficiency in the world.[1] In the United States, it accounts for 5% of anemia cases in women and 2% in men. Anemia (derived from the Greek word “anaimia,” meaning “lack of blood”) is associated with chronic fatigue, impaired cognitive function, and an overall decreased sense of well-being.

What Is Iron Deficiency Anemia?

Iron deficiency anemia is a medical condition characterized by low iron levels in the body, which leads to low hemoglobin levels and, ultimately, a disorder known as anemia. It is the most common cause of anemia. Anemia is a lack of red blood cells or hemoglobin in the body and results in a reduced amount of oxygen transported throughout the body. This causes weakness, fatigue, and cognitive impairment in persons afflicted with this condition.[2]

Increased blood losses resulting in iron deficiency can stem from a number of different factors. The most common is due to excessive bleeding during the menstrual cycle in premenopausal females.[3] This condition is known as menorrhagia. It’s why most women are more susceptible to iron deficiency anemia than most men.

In people who don’t menstruate, the most common cause of iron deficiency and iron deficiency anemia are disorders involving the gastrointestinal tract.[6] These include either a decreased absorption of iron or increased loss of iron due to blood loss.

The most common causes of bleeding disorders in the gut involve:[7][8]

What is Iron Used for In the Body?

Most people think of bridges, buildings, tools, and machines when they think of iron. After all, iron is used to make all these things. However, the human body has very different uses for iron. These include the following three main items:[4][9][10]

1) Transportation of oxygen throughout the body

3) The formation of energy

How Much Iron Do You Need?

The average human adult stores about 1-3 grams (1,000-3000 mg) of iron in their body.[4] There is no known mechanism for the human body to get rid of excess iron. The body does lose a very small amount of iron per day through sweat, urine, and stool though. These losses amount to approximately 1 mg of iron per day. In people who are menstruating, an additional 1 mg of iron per day on average is lost in the menstrual blood.

The human requirements for iron replacement involve replacing these daily losses of iron. This is equivalent to 1-2 mg per day of iron. The body needs so little replacement iron because it recycles most of the iron it uses. This iron is stored primarily in the liver, spleen, and bone marrow. Children may require a little more replacement iron for growth and development purposes, and pregnant mothers will require more for their growing baby. Below you’ll find the daily iron requirements for different ages and life stages according to the World Health Organization.

Daily Iron Requirements for 97.5% of the Population[4]

Where Does Iron Come From In the Diet?

There are two different forms of iron obtained in the diet – heme iron and non-heme iron.5 Heme iron is absorbed more readily by the human digestive system. Heme iron is only found in animal foods, mainly in meat (beef, chicken, pork, lamb, turkey, fish, seafood). Even though heme iron is better absorbed than non-heme iron it has been linked to an increased risk in several types of cancers including colon, stomach, esophageal, and endometrial cancers.[11][12][13]

Non-heme iron is mostly found in plant foods, but is also present in animal foods like dairy and eggs. It is typically obtained by eating vegetables, legumes, whole grains, fortified cereals, and a few other plant foods.

Humans absorb very little iron on the whole from dietary sources. Heme iron is absorbed at about a 15%-35% rate, whereas non-heme iron is absorbed at a rate of approximately 2%-20%.[4] On average, the typical Western diet contains roughly 7 mg of iron per 1,000 calories consumed.[1] So, if you were to consume a Western diet of 2,000 calories per day then this would be equal to 14 mg of iron per day. Remember though, only a fraction of this is absorbed in the digestive tract. It is usually still enough to meet the 1-2 mg/day that most people require to replace their daily iron losses.

Despite the common myth that vegans and vegetarians are more likely to be iron deficient and anemic, they are not.

Despite the common myth that vegans and vegetarians are more likely to be iron deficient and anemic, they are not. The Position of the American Dietetic Association pointed this out in 2009 stating, “Incidence of iron-deficiency anemia among vegetarians is similar to that of non-vegetarians. Although vegetarian adults have lower iron stores than non-vegetarians, their serum ferritin levels are usually within the normal range.”1[15]

How Can I Increase My Iron Levels?

If you find yourself diagnosed with iron deficiency or iron deficiency anemia, then obviously you need to increase your iron levels. You also need to work with your doctor to find the cause of your condition.

Obtaining more iron through dietary sources is preferred, especially through healthy plant foods. There are no side effects to eating vegetables! This is the safest way to increase your iron stores if only a minor deficiency exists. But for those with iron deficiency anemia, an iron replacement supplement may be in order.

Before you do anything though please remember to never take iron supplements unless your doctor tells you to. Do not self-diagnose yourself with iron deficiency anemia and start taking iron supplements over the counter because you feel tired or worn out. Supplementing with this metal can be potentially toxic, so please do not do it on your own. 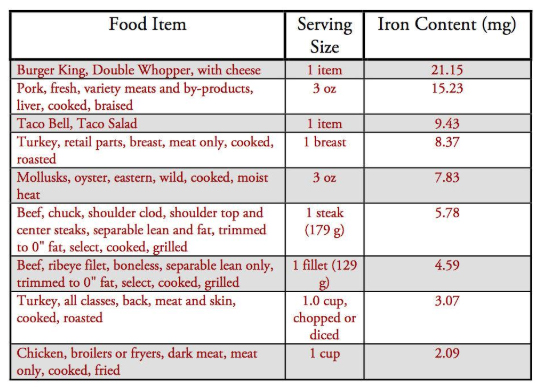 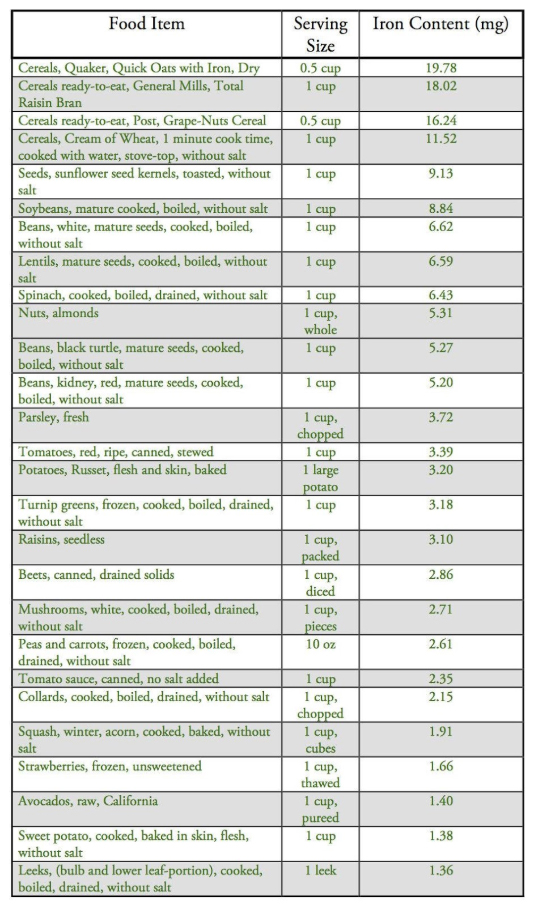 One positive note on iron deficiency anemia is that when an individual is anemic the body can compensate to allow more iron to be absorbed from the diet. This is one of our body’s innate mechanisms to try and fix the condition at hand. When this happens the digestive tract allows up to 20-40 mg/day of iron to be absorbed instead of the normal 1-2 mg/day.[5]

If you find yourself needing iron supplementation per your physician’s recommendation then there are a few different types of iron supplements to choose from.[17]

For a more detailed report of these different forms of iron please read an article discussing this more in depth on the Pharmacist’s Letter.

GI intolerance (nausea, vomiting, abdominal pain/discomfort, constipation, dark colored stools) can be the most troubling side effects for those taking oral iron supplementation and occurs in approximately 30%-43% of patients on the ferrous salt forms of iron.[18] Up to 50% of patients will stop taking their iron supplement because of these unpleasant side effects.[3]

The goal of taking oral iron replacement therapy in iron deficiency anemia is obviously to restore the iron stores in the body and to bring a person’s hemoglobin up to normal levels. Hemoglobin levels should start to rise after 1-2 weeks and should increase approximately 1 g/week with proper oral iron replacement therapy. After four weeks, those with a minor iron deficiency may get their hemoglobin levels back to normal, but some individuals may take longer.[19] It takes even longer to replenish iron stores back to normal in the body. This process can take up to 3-6 months of iron therapy.

In people who cannot tolerate oral iron therapy, or for those with severe anemia requiring faster iron replacement, there are IV forms of iron available. These are more expensive, require more healthcare resources and medical staff to administer and monitor the iron replacement infusion therapy, and have the potential to cause rare, but life-threatening, allergic reactions in some patients. Therefore, using intravenous iron infusion therapy should be discussed thoroughly with your doctor before proceeding.

Iron deficiency anemia is a serious medical condition requiring targeted goal therapies. Patients should work diligently with their doctor to find the cause of their condition while also treating with iron replacement therapy.

Diet is always a good place to start when trying to increase iron intake and may even be part of the cause. Many of the conditions talked about in this article that lead to decreased iron absorption or an increase in iron loss through bleeding are due in part or in full to diet—celiac disease, inflammatory bowel disease, diverticular disease, abnormal menstrual bleeding, hemorrhoids, colon cancer, etc. By adopting a whole food, plant-based diet, you may be able to eliminate or decrease the damage done by many of these diseases and, in the process, treat your iron deficiency anemia.

Some people will need to take iron supplements though if medically indicated by their physician. Iron and hemoglobin levels will need to be monitored while doing this, so make sure to work closely with your doctor to ensure you are taking the right dose of iron. In the end, iron deficiency can be easily treated with the right guidance and plan of action.

May life bring you an abundance of health and happiness in your journey towards optimal health!

My Battle With Crohn’s – How Going Plant-Based...