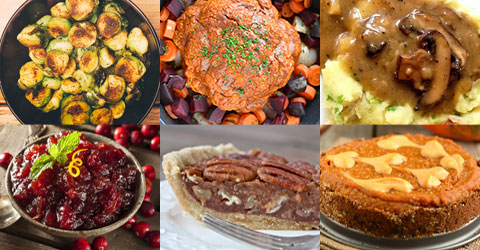 Plant-Based Thanksgiving Menu and Brief History of the Holiday

After surviving their first harsh colonial winter, the Pilgrims had a three day “harvest celebration in 1621”[1] now known as Thanksgiving. According to culinary historians the original meal likely included: vegetables such as onions, beans, lettuce, spinach, cabbage, carrots, possibly peas, and corn products.[2] Local fruits including: blueberries, plums, grapes, gooseberries, raspberries and cranberries were enjoyed. Pumpkins were on the menu but not in pies, as there was no flour, butter, or ovens. Ducks, geese, and swans were boiled and cooked over a fire. The Pilgrims enjoyed home brewed beer and turkey may have been served.[3]

In 1941 Congress declared Thanksgiving a legal holiday. Now the US observes Thanksgiving on the fourth Thursday of November. In 1947, the National Turkey Federation began a tradition by presenting one live turkey and two dressed turkeys to the President who “pardons” one allowing it to live out its days on a historical farm.[4] The dressed turkeys are not so lucky (dressed means filled with dressing). 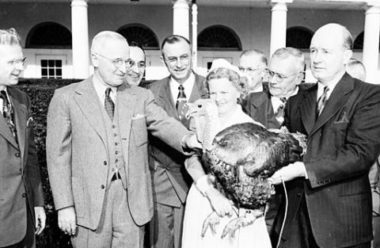 For many the celebration would not be complete without a turkey on the table. In the US, some 46 million[4] turkeys are consumed on this holiday nicknamed “Turkey Day.” However, more and more people have started to break away from this turkey eating tradition for health, animal welfare, or environmental reasons. There are an abundance of mouth-watering whole food, plant-based dishes to satisfy the palate instead. At the Center for Nutrition Studies we are grateful for nature’s cornucopia and have shared our favorite Thanksgiving recipes below. Happy Thanksgiving! 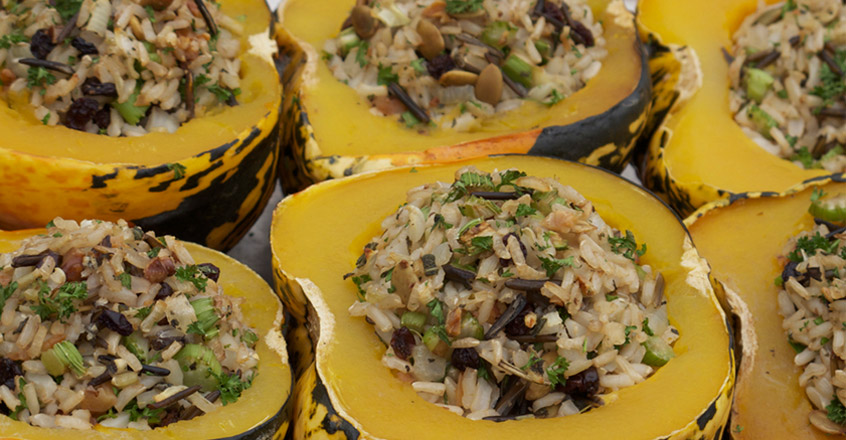 If you are hosting many people this recipe serves 24! Tip: delicata or acorn squash can be substituted for the carnival squash. 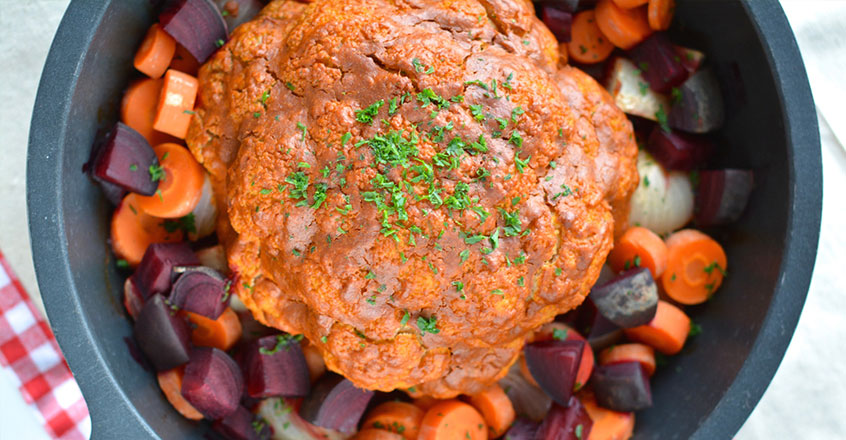 Instead of roasted turkey try this roasted cauliflower recipe. Its appearance is really something special and of course it tastes great! 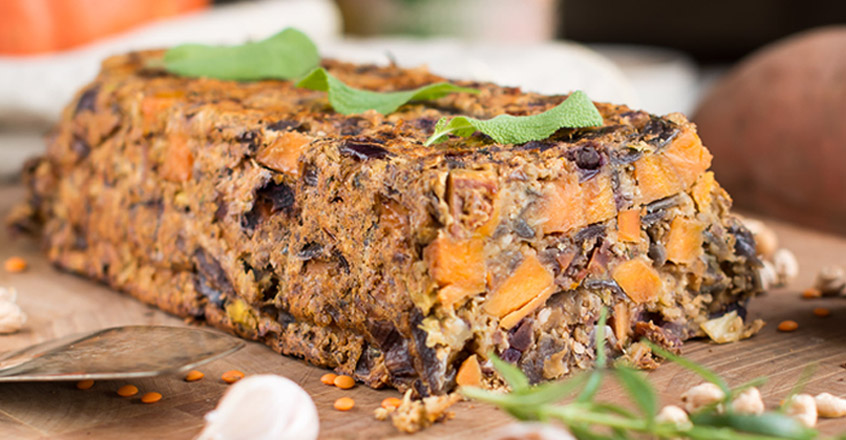 Don’t carve a turkey this Thanksgiving, instead carve this lentil loaf. It pairs well with the included ‘Cheesy Sauce’ recipe. 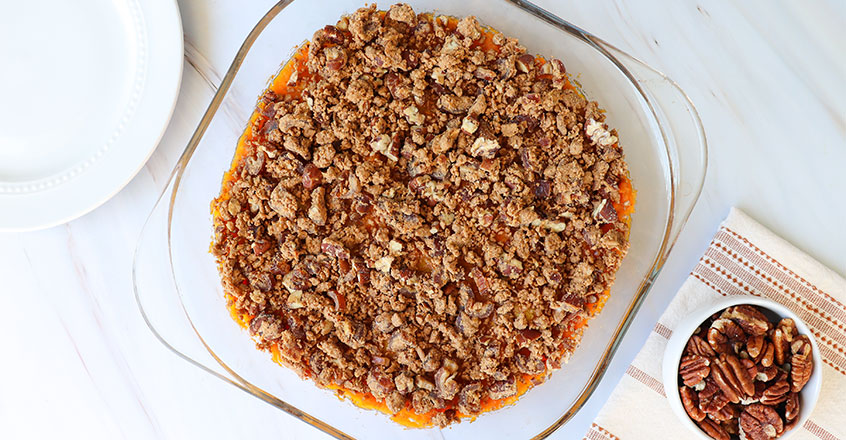 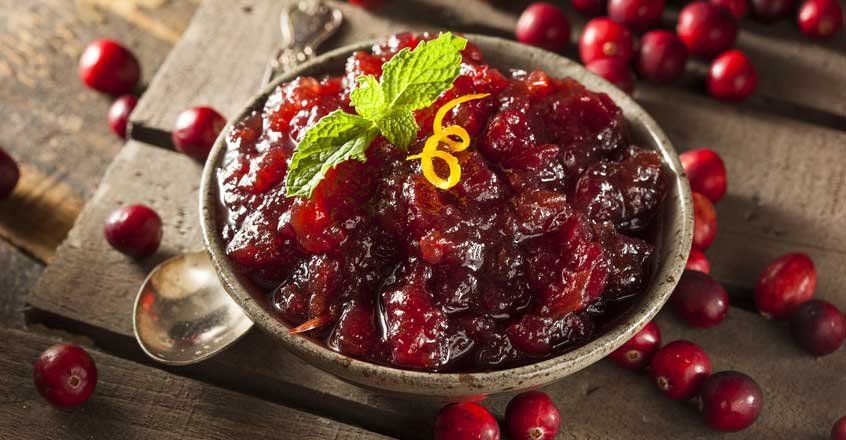 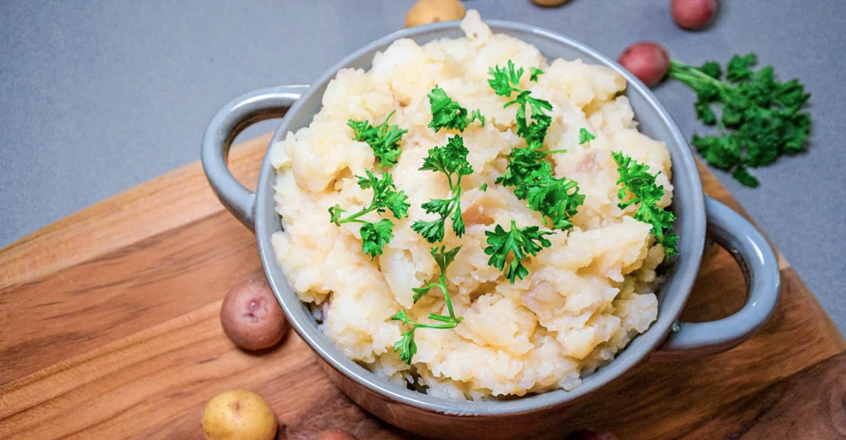 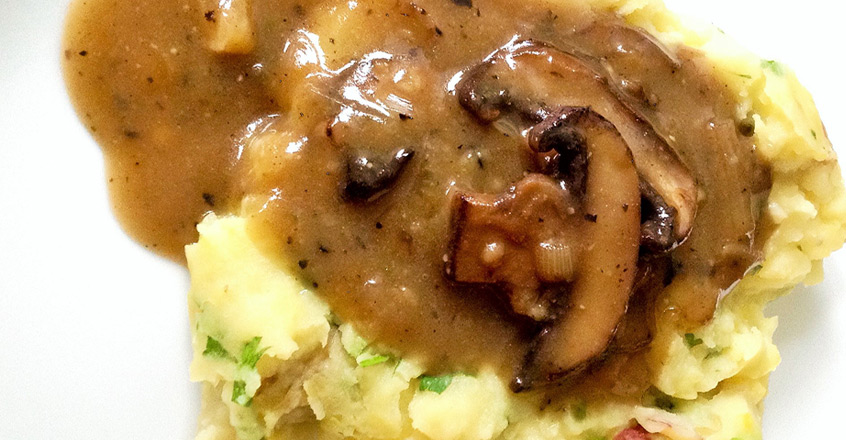 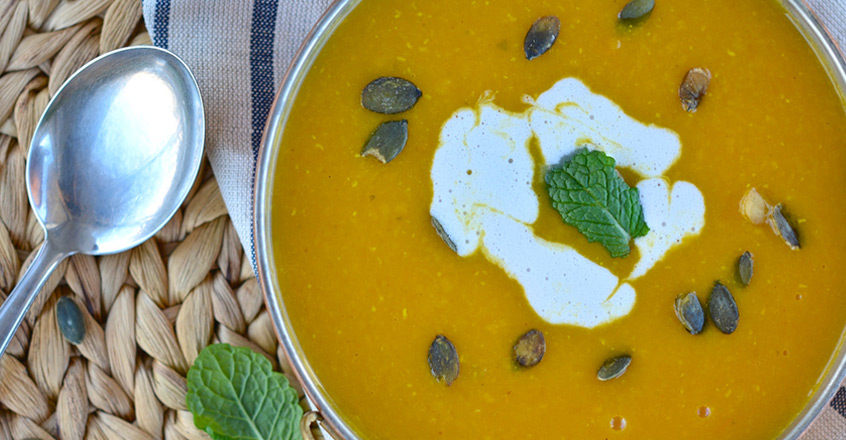 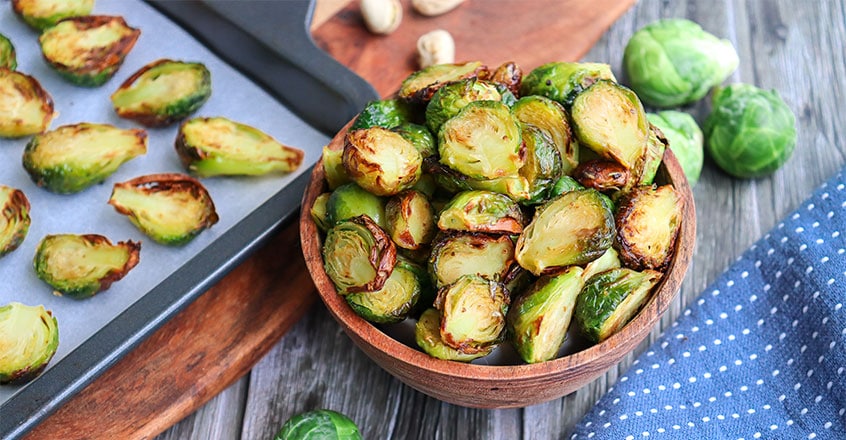 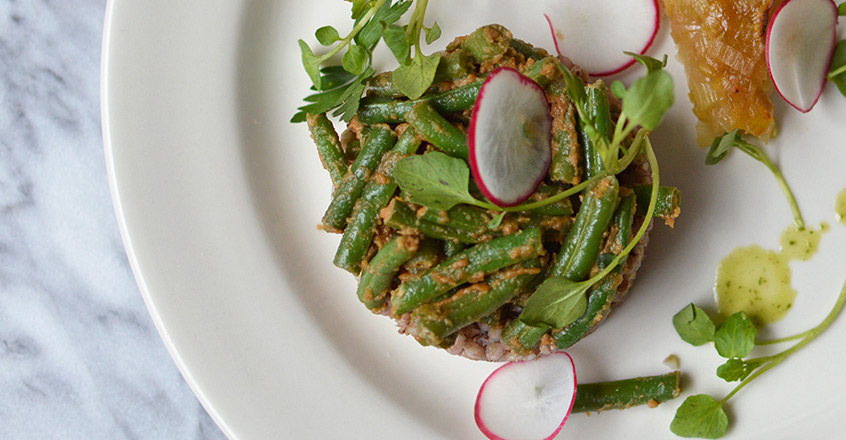 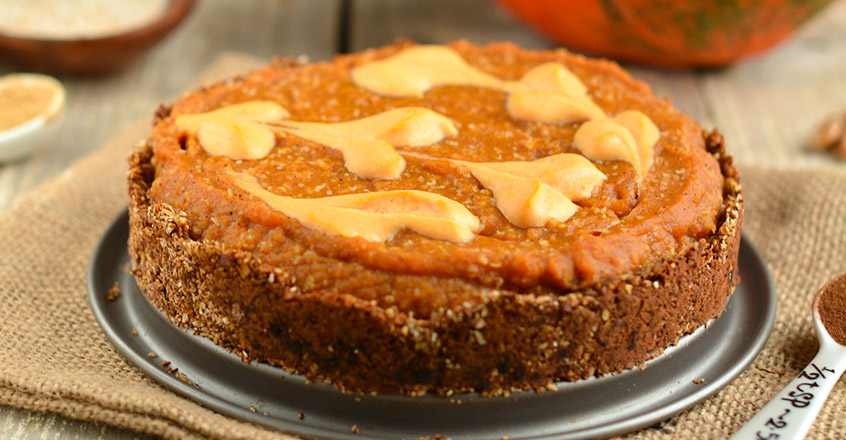 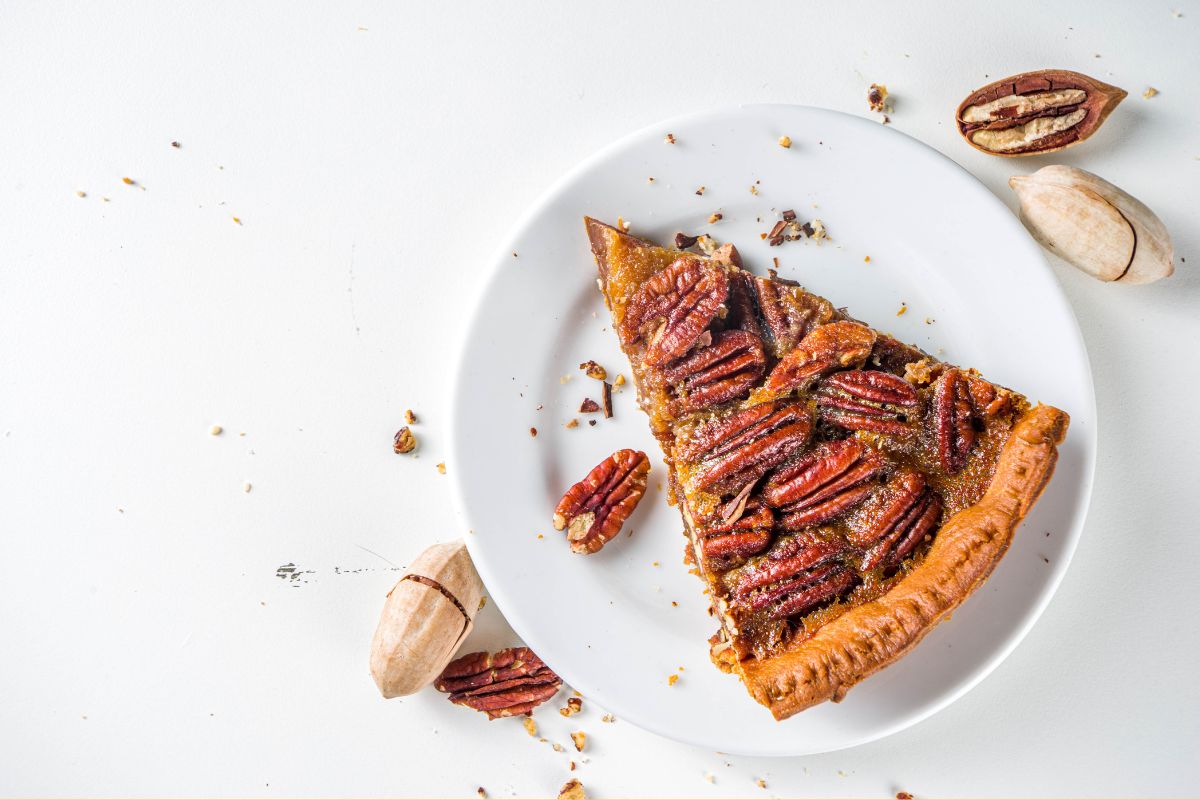 Pecan pie is a popular holiday dessert. This healthy whole food, vegan pecan pie is so deliciously decadent, yet not overly sweet. 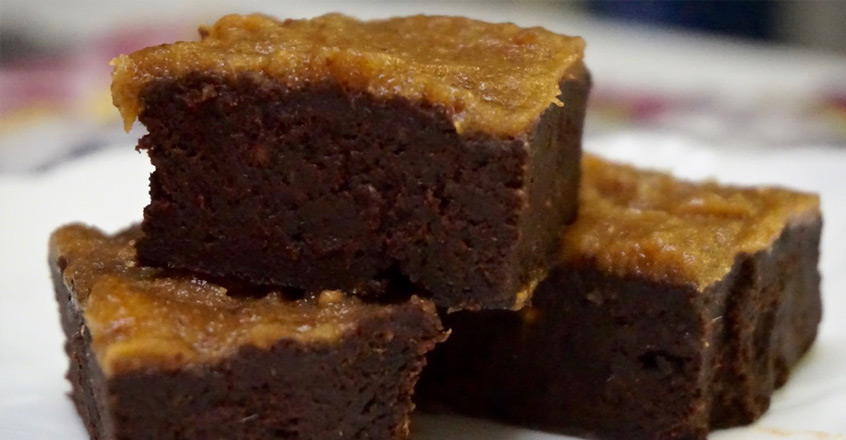 These gluten free frosted brownies have an incredible fudge-like texture, with a delectable frosting, and yet not overly sweet. 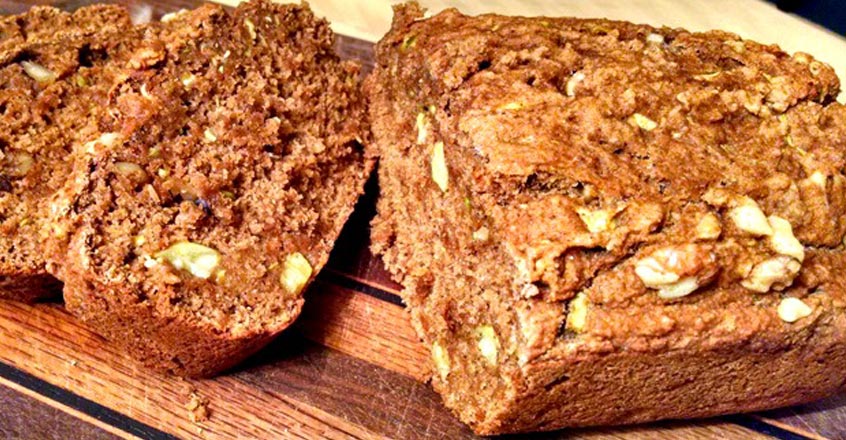 With freshly grated zucchini, applesauce, and allspice, this deliciously & easy recipe can be enjoyed with Thanksgiving dinner or as dessert.