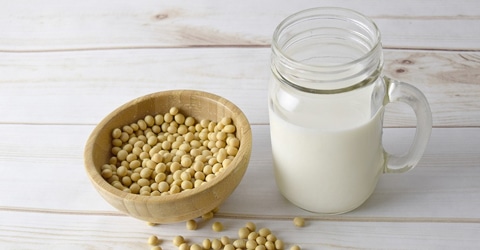 Touted as a superhero and denounced as a villain, soy remains at the center of ongoing controversy. Although soybeans may have been grown in China as early as 9,000 B.C. and soy foods are a staple of diets throughout Asian countries, many people are still uncertain whether this plant-based protein has benefits or is a threat to long-term health.[1]

The confusion has given rise to numerous conflicting reports about how soy affects the body, including whether it promotes or reduces the risk of chronic diseases. Finding the whole story requires taking a step back for an objective look at this much-debated bean.

Soy began to make its way into the American diet in the 1960s, but it wasn’t until the 1990s that studies showing potential benefits for heart health led the FDA to approve a claim on soy products stating 25 grams of soy protein per day could reduce the risk of coronary heart disease.

Repeated claims that soy affects thyroid function or has a “feminizing” effect on men are largely unfounded.

Decades of research[2] from the 1970s to the present have shown additional associations between soy consumption and improved health, including:

Soy contains compounds called isoflavones, which can act as antioxidants in the human body. Antioxidant activity may be responsible for the apparent correlation between soy consumption and lower lipid peroxidation, which can reduce the risk of arterial plaques. Higher antioxidant consumption is also associated with decreased cancer risk.

In addition to interacting with ERβ, phytoestrogens can inhibit the synthesis and activity of enzymes used in estrogen metabolism, altering the way estrogens and androgens behave in the body.[8] Consumption of soy isoflavones can also prevent the activity of tyrosine kinases, enzymes normally responsible for processes such as cell growth, differentiation, metabolism, and apoptosis. Those enzymes may also promote the proliferative activity of cancer cells.[9]

Does Soy Have a Dark Side?

Repeated claims that soy affects thyroid function or has a “feminizing” effect on men are largely unfounded. Compounds in soy can inhibit the entry of iodine into the thyroid gland and interfere with the absorption of thyroid medications, earning them the classification of “goitrogens.”[10] Although some studies suggest women and people with low iodine intake may be more susceptible to these potential effects than men,[11] the majority appear to show no correlation between soy consumption and altered thyroid function.[12]

The biggest problem with soy is likely the way it’s used in processed foods, not it’s consumption in whole forms. Soy is abundant—the U.S. produced 4.31 billion bushels of soybeans in 2016[13]—and food processors incorporate it into a wide variety of products.

Soy protein isolate, present in many mock meats, is a highly processed form of soy protein made by extracting the fat and many of the carbohydrates from soybeans, leaving a product that’s about 90% protein and lacking the majority of the nutrients giving soy its health benefits. Extracted fat from the production of soy protein isolate and other dry soy products is used to make soybean oil, which appears in numerous processed foods with vegetable oil as a main ingredient.

Overall, the confusion about the health effects of soy appears to stem from studies citing high intake levels and the failure to differentiate between whole soy and processed soy foods. For example, in a review of studies showing that soy may decrease ovarian function, effects were seen when daily consumption exceeded 100 milligrams of soy isoflavones, or about four servings of unprocessed soy foods.[14] The study authors concluded “phytoestrogens at very high levels” may be problematic but moderate soy consumption “as part of a well-balanced diet” likely poses no risks.

However, it should be noted that soy is listed among the top eight allergens in the U.S. Between 0.2 and 0.4% of children have soy allergies, and although most of them grow out of it, reactions can continue into adulthood. Avoid eating soy if you experience any of the following symptoms:[15][16]

You’re more likely to have a soy allergy if someone else in your family is allergic, and an allergy test can confirm whether soy consumption is responsible for your symptoms.[17]

Some Guidelines for Soy Consumption

Following the basic principles of whole food, plant-based eating is the best way to choose which soy foods to include in your diet. Look for:

These options contain all or the majority of nutrients believed to give soy its benefits. Dry soybeans can be cooked and used in recipes like other beans and legumes, and tempeh is a delicious alternative to meat in recipes calling for ground beef, sausage, chicken, or bacon. Avoid isolated soy protein and other highly processed soy foods, as well as foods containing soybean oil.

How much soy should you eat? According to Dr. Michael Greger, it’s safe to consume up to five servings per day.[18] Eating more than this could elevate levels of IGF-1 protein in the body and negate some of the positive health effects, such as reduction in cancer risk.[19] One serving is equal to approximately half a cup of tofu, tempeh, or whole soybeans. By following these guidelines, you can include soy as part of a nutritious, whole food, plant-based diet and lifestyle.

Soy…The Rest of the Story